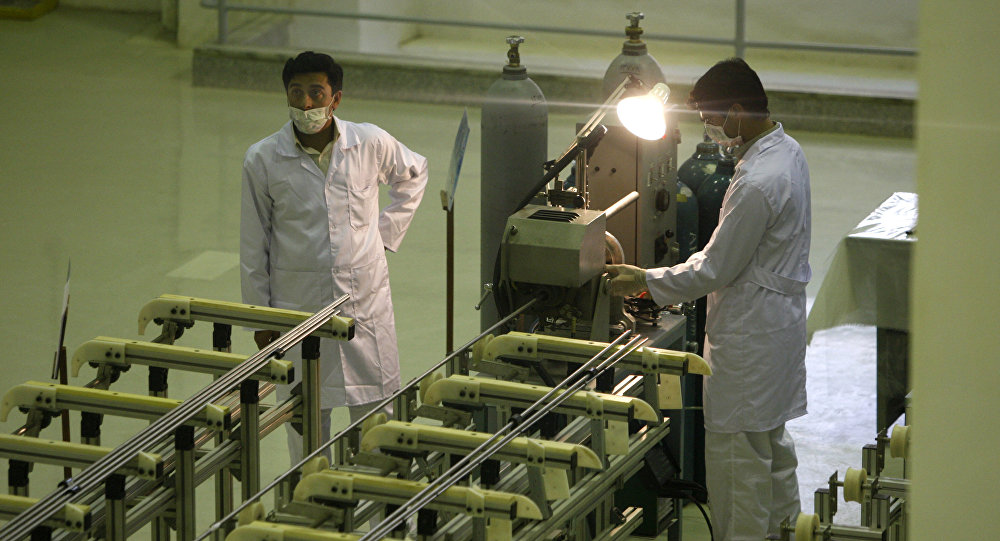 Tehran is bracing for the fallout of renewed US sanctions following President Trump's pullout from the Joint Comprehensive Plan of Action (JCPOA), and has threatened to relaunch its uranium enrichment program if the nuclear agreement breaks down.

Iranian Atomic Energy Organization head Ali Akbar Salehi has announced that the factory producing rotors for centrifuges has come online, and will assist with Tehran's plans to increase its uranium enrichment capacity to 190,000 SWUs.

Speaking to the Iranian TV channel IRIB on Wednesday, Salehi announced the completion of the rotor plant, which has the capacity to produce about 60 IR-6 centrifuge machines a day, and explained that the factory was built during nuclear talks with world powers, but never started up.

"Of course, [Supreme Leader Ayatollah Ali Khamenei] was completely informed and we gave him the necessary information at the time. And now that he has given the order this factory has started all of its work," the official said.

© AFP 2019 / ATTA KENARE
Iran Ready to Boost Uranium Enrichment if Talks With EU Fail - Official
The factory does not break the terms of the JCPOA, Salehi said. The capacity is part of pre-JCPOA Iranian plans to produce its own nuclear fuel for the Bushehr Power Plant, with the nuclear plant estimated to require about 100,000 SWUs.

Last month, Salehi said that Iran had developed the infrastructure at the Natanz nuclear facility in central Iran which would allow it to enrich up to one million SWU.

Also this week, the Iranian Atomic Energy Organization warned that it was preparing the groundwork for increasing enrichment if needed and if the negotiations with Europe to salvage the JCPOA failed.

The United States pulled out of the JCPOA in May, despite Iran's continued compliance with the agreement, as attested to by the International Atomic Energy Agency. The US pullout prompted the deal's other signatories, including Russia, China, and the European powers to scramble to try to salvage it. During his visit to Europe earlier this month, Iranian President Hassan Rouhani praised the other JCPOA signatories' demonstration of firm political will to remain committed to the deal. Last month, Iranian Deputy Foreign Minister Abbas Araqchi warned that Tehran could not rule out withdrawing from the JCPOA entirely if it is no longer in the country's interests.

Following the pullout, the US promised to reimpose sanctions lifted under the terms of the 2015 nuclear deal and to introduce new ones, and made threats to reduce Iranian crude oil exports "to zero." On Tuesday, Iran filed a lawsuit against the US in the International Court of Justice over Washington's unilateral imposition of sanctions.