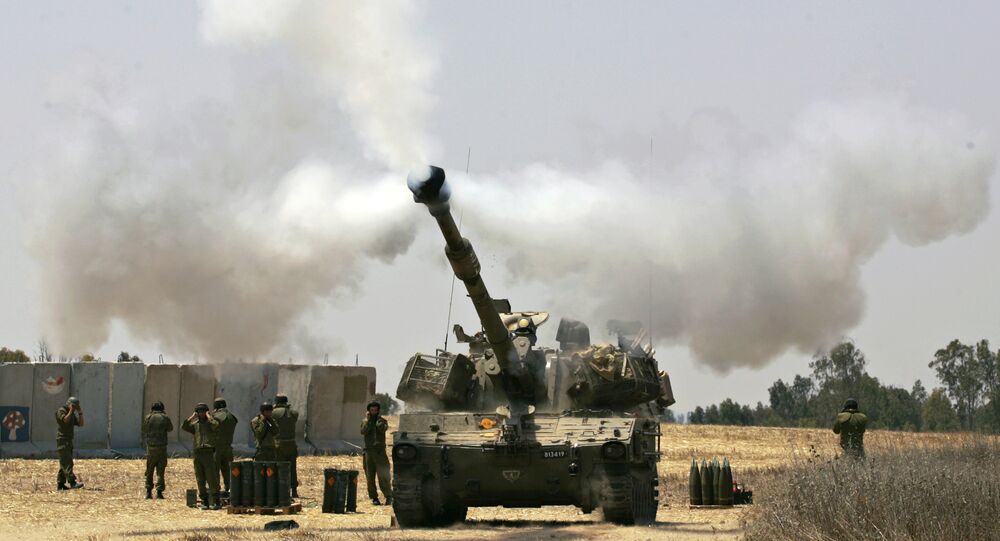 TEL AVIV (Sputnik) - The Israeli army hit a mortar launcher in the Gaza Strip in response to the firing of two mortar shells from the Palestinian enclave, the Israel Defense Forces said on Sunday, hours after reports emerged about the ceasefire agreement reached by the Israeli forces and Palestinian militants.

"Following reports regarding a siren in the Eshkol Regional Council, two mortar shells were launched from Gaza at Israel. In response, the IDF struck the launcher from which the mortar shells were fired," the IDF wrote on Twitter.

Following reports regarding sirens in Sderot, two rockets were launched from Gaza towards Israel. The Iron Dome aerial defense system intercepted one of the rockets pic.twitter.com/YJQLdQizJR

© AFP 2021 / MOHAMMED ABED
Israeli Jets Hit Dozens of Palestinian Military Targets in Gaza Strip (VIDEO)
The fire exchange happened amid reports about the ceasefire deal between Israel and armed groups in Gaza Strip, which emerged in the late hours of Saturday. The agreement was reportedly brokered by Egypt.

Military actions escalated in the area in the early hours of Saturday, when the Israel Air Force started hitting militants' targets in the Gaza Strip. The shelling followed Friday's border riots. The situation led to the largest escalation between the sides over the past years.

© Flickr / Israel Defense Forces
Israel, Gaza Exchange Fire Overnight, Israeli Defense Forces Report
The situation on the Gaza border deteriorated in mid-May after US opened its Embassy in Jerusalem. On March 30, the rally called Great March of Return began on the border. The Israeli side has been using lethal arms to suppress the rallies citing security concerns and putting the blame for the escalation on the Hamas radical movement.
...
Reddit
Google+
Blogger
Pinterest
StumbleUpon
Telegram
WhatsApp
25