Erdogan Takes Oath of Presidential Office Ahead of Inauguration

ANKARA (Sputnik) - Recep Tayyip Erdogan on Monday swore an oath of office in the Turkish parliament in the presence the government members and lawmakers ahead of his assumption of official inauguration as Turkish president after a recent re-election for a new five-year term.

After taking his oath, Erdogan is expected to issue his first presidential decree on the composition of the new Cabinet, first to be formed under the presidential form of government.

He is also expected to host a grand reception at the presidential palace, attended by some 3,000 people, including 22 heads of state and 17 heads of government, vice presidents and parliamentary speakers. 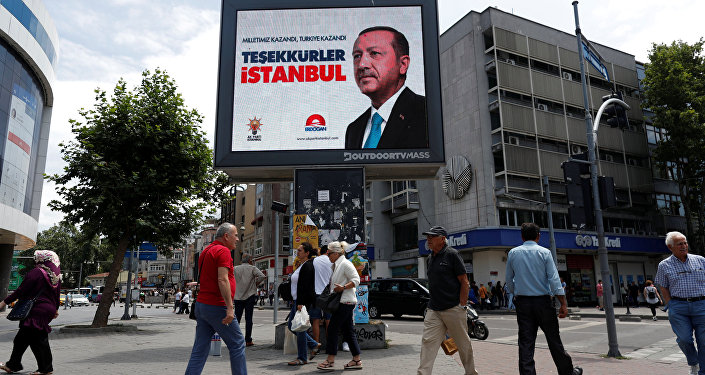 © REUTERS / Osman Orsal
Ankara Issues Special Decree Transferring New Powers to President - Reports
After he was re-elected with some 52.6 percent of the vote on June 24, Erdogan vowed that his inauguration ceremony would open a new era of development for his country and contribute to tackling major economic challenges.

The ceremony is expected to be followed by a big event in the presidential palace with the participation of 22 heads of state and 17 heads of government, vice presidents and parliamentary speakers.