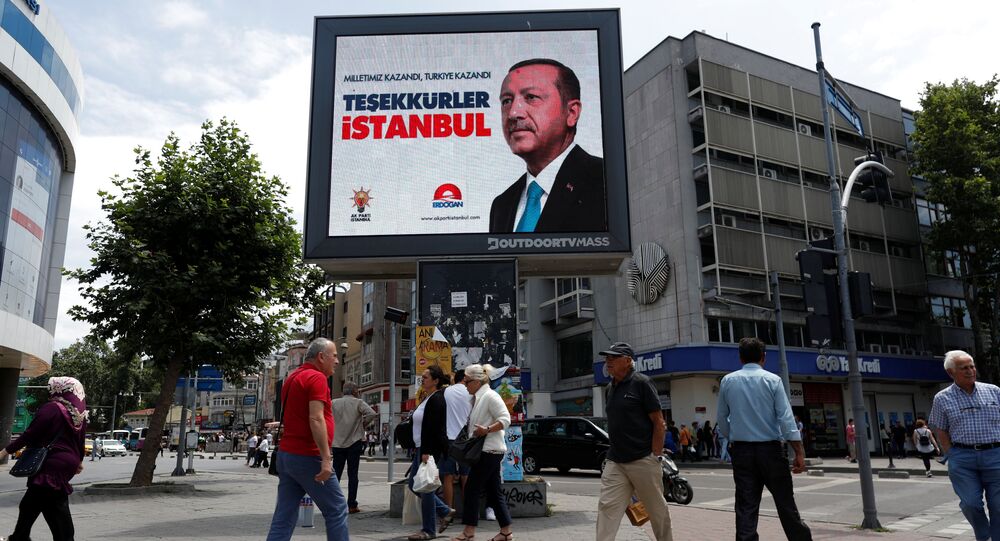 ANKARA (Sputnik) - The Turkish government has adopted a decree in line with the state of the emergency regime, declared following the 2016 coup attempt, the official Resmi Gazete reported.

Turkey has announced the dismissal of another 18,632 people from the civil service over suspected links to the movement of Islamic cleric Fethullah Gulen, referred to as the Fethullah Terrorist Organization (FETO) by Ankara and accused of being behind the attempted coup.

According to the decree published on Sunday in the official Resmi Gazete, as many as 6,152 people have been discharged from the Turkish armed forces, including 3,077 people from the ground forces, 1,126 — from the naval forces, 1,949 — from the air force.

© REUTERS / Osman Orsal
Erdogan's AK Party 'Will Provide Continuity of Success for 5 Years' – Lawmaker
Further 8,998 employees have lost their posts in the country's security service, while 649 people were dismissed from their posts in the gendarmerie.

The decree has also dismissed a certain number of employees of the Turkish Justice Ministry (1,051), the Education Ministry (658), the Directorate of Religious Affairs (240), the Foreign Ministry (38) and state universities (199).

Besides, the decree ordered shut down of 12 public organizations, three newspapers, and a TV channel.

© AP Photo / Presidential Press Service/Pool
Erdogan Calls on Turks to 'Give West Lesson' at Upcoming Presidential Election
Following the coup attempt, which took place in Turkey on July 16, 2016, Ankara has arrested over 50,000 representatives of military personnel, activists, officials, journalists, as well as legal and educational workers and dismissed over 140,000 officials over suspected links to Gulen.

Gulen himself, who has been residing in the United States since 1999, has refuted all the allegations on numerous occasions.