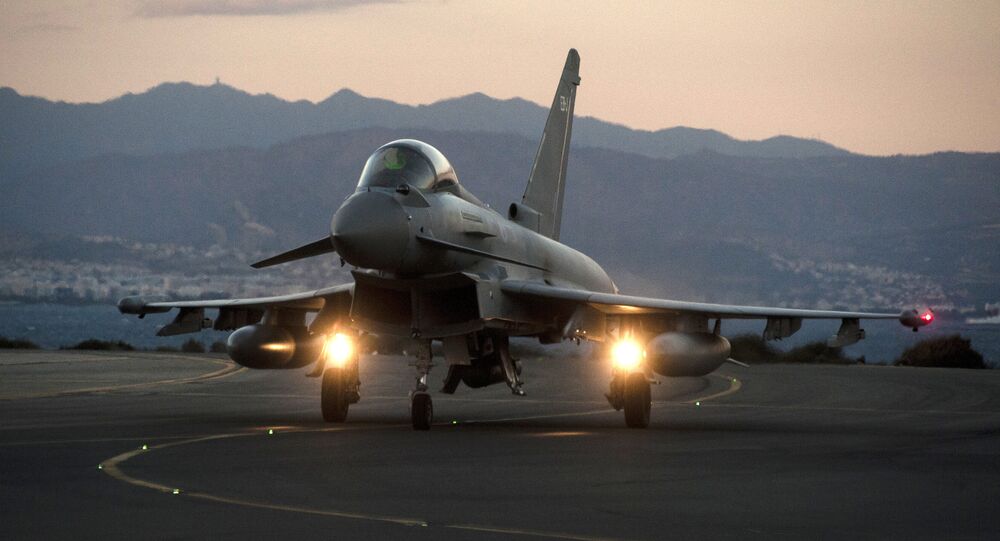 The Royal Air Force strike on Syrian troops is the first of its kind since April, when the US, UK and France launched missile strikes against multiple targets in the Arab republic after an alleged chemical attack in Douma.

A Ministry of Defense spokesman confirmed that the RAF attack had taken place, and said that a group of anti-Damascus Maghawir al-Thowra opposition militia and coalition "advisers" were attacked by an "unidentified force" outside the al-Tanf base on June 21, prompting the RAF response.

"As an act of collective self-defense, RAF Typhoons dropped a single Paveway IV on the position, which successfully removed the threat to our coalition partners," the spokesman said. "There was no need to inform Parliament of this action…only in the event that civilian casualties have resulted from a RAF strike would the [defense secretary] inform parliament of events," he added.

© AP Photo / Pavlos Vrionides
British Defense Chief Defends Bombing of "Really Wicked and Evil Enemy" in Syria
The MOD refused to comment on the identity of the force attacked, but called the bombing a "wholly proportionate response."

According to the Sunday Times, the airstrike killed one Syrian Army officer and wounded seven others. Damascus has yet to comment on the reported casualties.

British and US Special Forces troops and trainers deployed in southern Syria in 2016 and have been engaged in the training of anti-government militia. Damascus has repeatedly demanded that the coalition end its "illegal presence" in the country. Damascus and Moscow have also accused the coalition of "spewing Daesh* mobile groups" from the region.

The US-led coalition has carried out a campaign of airstrikes ostensibly aimed against Daesh since 2014. The coalition has no UN mandate or authorization from Damascus, and the Syrian government has called its activities a violation of its sovereignty. The US and its allies have repeatedly targeted Syrian government troops, most recently in April, where in response to an alleged chemical attack in Douma, they launched over 100 cruise missiles at government-controlled cities and facilities. Syria and its Russian and Iranian partners called the Douma 'attack' a false-flag operation designed to justify new attacks on Syria.