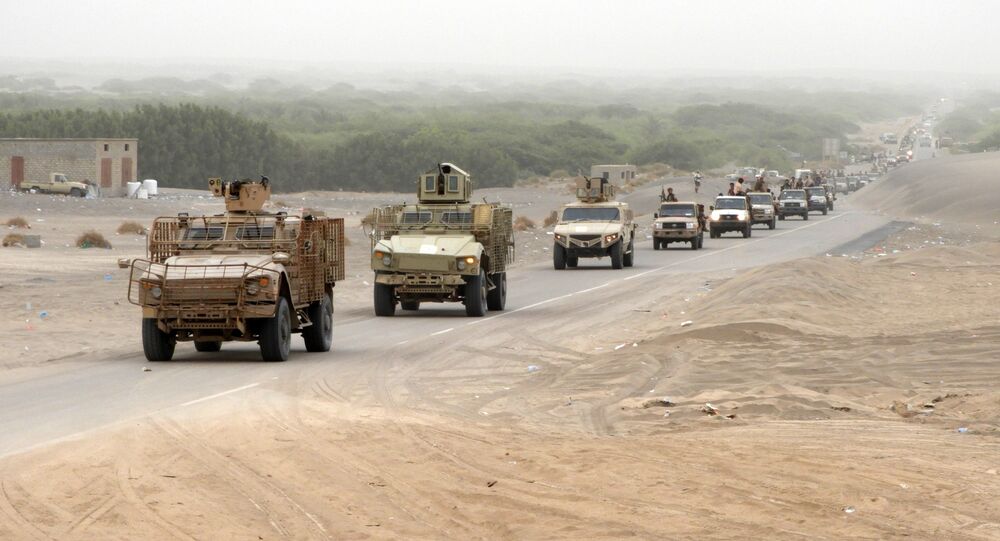 DOHA (Sputnik) - Saudi-led coalition is continuing the operation to establish control over Yemeni port city of Al Hodeidah together with the troops on the side of Yemeni President Abd Rabbuh Mansur Hadi in order to force the rebels from the Houthi movement to sit down for negotiations, the coalition's spokesman Turki Maliki said Monday.

"Military operations in Al Hodeidah continue in order to put pressure on the Houthis and force them to sit down at the negotiating table. These military actions are part of the political process in Yemen and are in accordance with international law," Maliki said at a press conference broadcast by the Saudi channel Al Ekhbariya.

Maliki also accused the Houthis of disrupting all political efforts that could lead to a negotiated solution to the crisis.

© AFP 2020 / NABIL HASSAN
Yemeni Pro-Gov't Forces Plan to Restore Control Over Hodeidah Port - Spokesman
Yemen is engulfed in an armed conflict between the government and the Houthi militia. The Saudi-led coalition of mostly Persian Gulf nations has been carrying out airstrikes against the Houthis at the Yemeni President's request since March 2015.

Military operations in Al Hodeidah began earlier in June when the Yemeni government forces, supported by the Saudi-led coalition, engaged in an offensive to recapture the port from the Houthis. The battle continues despite warnings by the international community that the situation would aggravate the acute humanitarian crisis in Yemen.

The conflict has resulted in thousands of people being killed and a major nationwide humanitarian crisis. According to the United Nations Office for the Coordination of Humanitarian Affairs (OCHA), in 2018, 22.2 million Yemenis have been in need of assistance, which is one million more than in 2017.

France Not Engaged in Military Actions in Yemeni Hodeidah - Reports