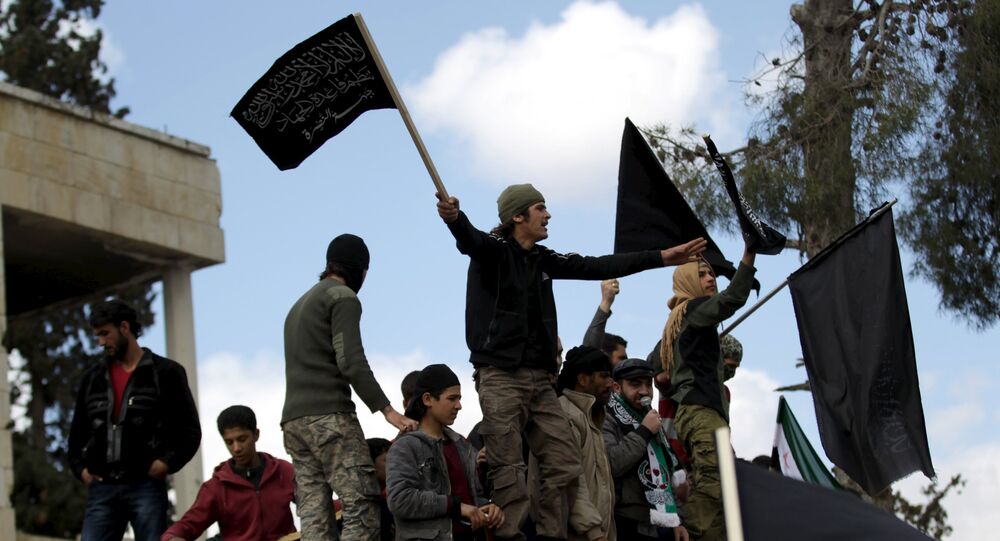 Nusra Front terrorists had carried out an attack targeting settlements that had joined the government forces in the southern de-escalation zone, the Russian military reported.

According to the Russian Center for Syrian reconciliation, almost 70 al-Nusra (also known as Tahrir al-Sham) militants were killed, as the government forces jointly with the Free Syrian Army (FSA) repelled the terrorist group's attack in Syria's southern de-escalation zone. The Russian military noted that there were no losses among the Syrian army’s servicemen, but provided no details regarding casualties among the FSA units.

"Over the past 24 hours, Jabhat al-Nusra militants have attacked the settlements in the southern zone of de-escalation, which joined the legitimate government," the center's statement reads.

In addition, Syrian government troops have destroyed 3 armored vehicles and 14 pickups carrying the heavy machine guns of militants, according to the statement.

READ MORE: US Will Not Intervene in South Syria to Back Anti-Gov't Forces — Reports

The total number of settlements in the southern de-escalation zone which joined the Syrian government forces increased to 12 on Sunday, the Russian Defense Ministry pointed out.

The day before, Syrian President Bashar Assad warned in his interview with a Russian broadcaster that the terrorists from the Nusra Front can return to the idea of building a so-called caliphate with Western help.

© REUTERS / Ammar Abdullah
Russian Army Busts Nusra Filming Fake Footage to Accuse Russia, Syria in Idlib
On Saturday, the government forces, together with FSA detachments, repelled over a thousand Nusra Front attacks in the southern de-escalation zone in parts of the country's Daraa and Quneitra provinces, as the Syrian military is currently carrying out an anti-terrorist operation in the area.

Most of Syria's territory has already been liberated by the government forces backed by the Russian Air Force, however, there are still some terrorist pockets located mainly in the southwest US-controlled areas.

The international community has actively been making an effort to find a solution to the Syrian conflict and forge peace within the country. As a result of the Astana talks, four de-escalation zones have been established in Syria, including a southern de-escalation zone.