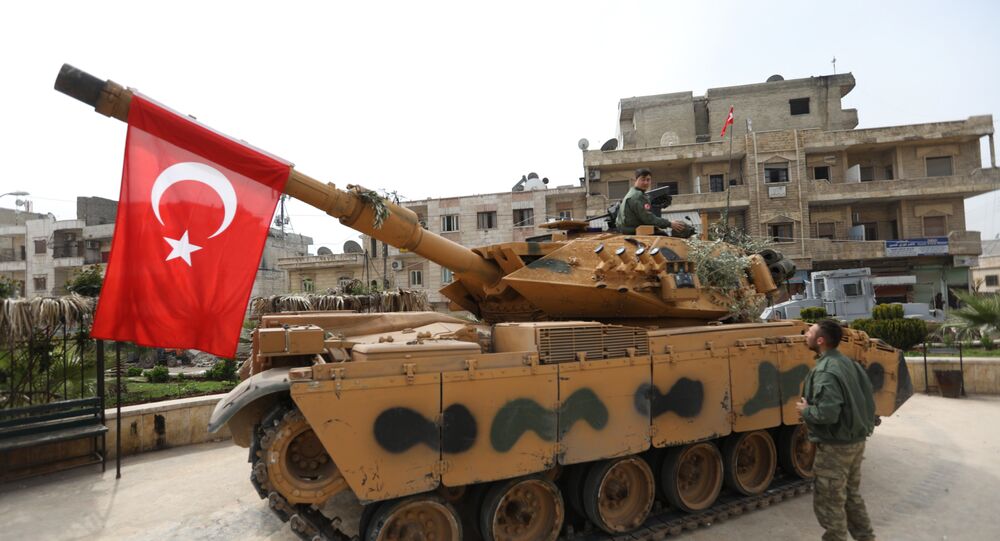 ANKARA (Sputnik) - The Turkish armed forces have occupied the outskirts of the Syrian city of Manbij in line with a road map coordinated with the United States, the NTV television channel reported citing local sources.

The channel showed photos of armored vehicles with Turkish flags, which are said to be on the outskirts of Manbij.

Turkish Prime Minister Binali Yildirim confirmed on Monday that the Turkish troops had been deployed in the Syrian city of Manbij.

"Today Turkish servicemen were posted in Manbij," Yildirim said, as quoted by the NTV broadcaster.

"We have said that will take a step together with the United States. The goal is to bring stability to regions, which are under the control of the Kurdish People's Protection Units [YPG]. Patrolling has started near Manbij. Our troops will enter the center of the city. In the near future Manbij will be cleared of terrorists," Cavusoglu told reporters.

The General Staff of the Turkish Armed Forces reported in its Twitter account that this afternoon, as part of the implementation of the road map between Turkey and the United States on the Syrian city of Manbij, the Turkish military arrived, in armored vehicles, in the area of the Sajur River north of Manbij on the border between Dzherbalus and Manbij, and began patrolling the areas adjacent to Manbij.

Turkish armed forces enter outskirts of #Syria's #Manbij as part of deal with #US #Turkey
📸 pic.twitter.com/yNJ7vVVtSA

#Turkey #Syria #Manbij #Aleppo #US
While Turkish patrols entering on the ground… US helicopters were seen flying over the same area pic.twitter.com/knaAeE9wyP

Earlier, Department of State spokesperson Heather Nauert said that the US and Turkish governments had arrived at an arrangement to bring stability and self-rule to the area of Manbij. She added that Syrian Kurdish People's Protection Units had agreed under the arrangement to move their parties east of the Euphrates River.

#Turkey #Syria #Manbij #Aleppo #US
Footage for the Joint patrols of US and Turkey while entering Manbij city pic.twitter.com/vF3qDYBaYB

In early June, Turkish Foreign Minister Mevlut Cavusoglu said the roadmap would include three stages and stipulate that the YPG troops lay down their weapons. Cavusoglu also said that the framework of cooperation between Ankara and Washington used in Manbij could later be used in other regions of northern Syria.

US-Turkish relations have suffered a setback amid Ankara's concerns over Washington's support for the YPG, which is considered by the Turkish authorities as an affiliate of the Kurdistan Workers' Party (PKK), a terrorist organization outlawed in Turkey.