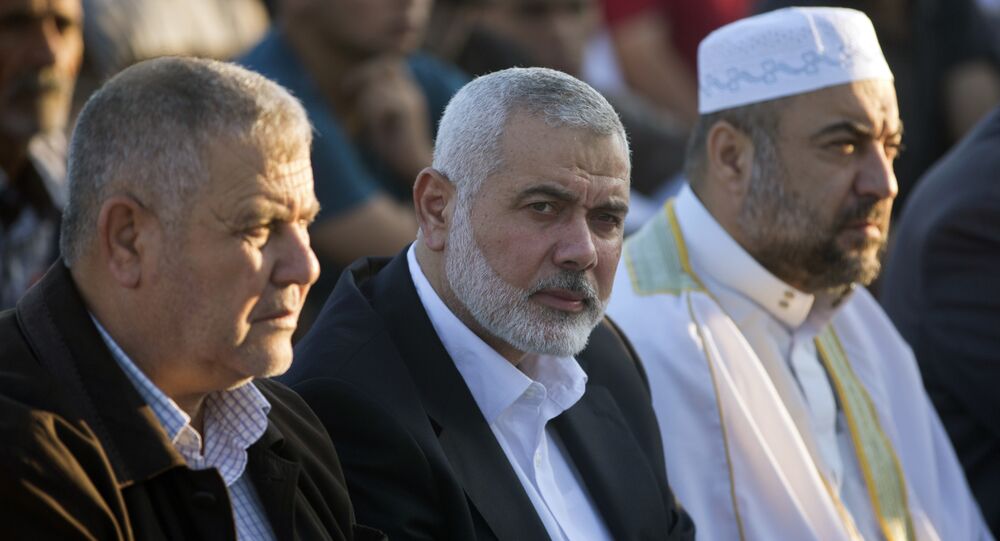 The militant leader's attendance of the morning prayer during the Muslim holiday of Eid al-Fitr comes amid over two months of violent Gaza protests which have left over 100 Palestinians dead and thousands more injured.

Commenting on the recently passed UN resolution condemning "excessive" Israeli violence against Palestinians during the protests, Haniyeh said that "the marches of return and breaking the siege [have] revived the Palestinian issue and imposed it on the international agenda."

© AFP 2020 / NIKOLAY DOYCHINOV
UN Resolution on Gaza Violence Blow to US – Palestinian Foreign Minister
Hamas, which governs the 365 square km Gaza Strip, has led the wave of protests against Israel since March 30, when Gaza Palestinians began mass rallies in favor of a right of return, against the blockade of Gaza, and against the move of the US embassy to Jerusalem.

Over 120 protesters have been killed, with 3,800 more wounded by the Israeli military. Since late March, Hamas has also fired several dozen rockets, as well as booby-trapped kites and helium balloons with flammable materials, into Israeli territory. One Israeli soldier has received light injuries, with property damage also reported.

Tel Aviv has used lethal means to suppress the rallies, citing security concerns, and has blamed Hamas for the escalation of the violence.