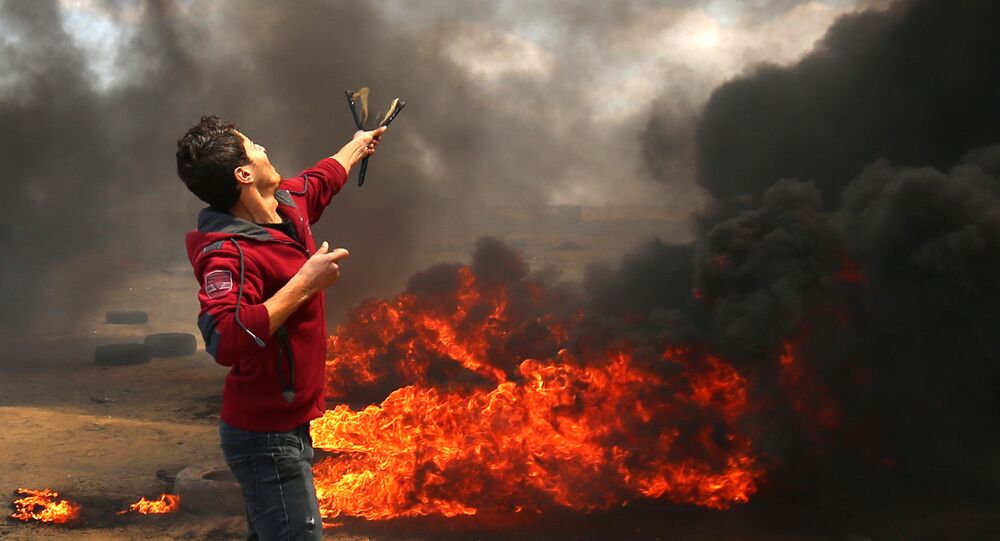 The Israel Defense Forces (IDF) on Saturday inflicted a warning air strike on a group of Palestinians in the Gaza Strip, which were preparing to send a batch of explosive balloons over the border into Israel, a IDF spokesperson said.

"Moments ago, the IDF identified a group of Palestinians preparing balloons with explosive devices attached to them to be sent into Israel in order to ignite fires and cause extensive damage to Israeli territory. In response, an IDF aircraft fired a warning shot next to the group," the spokesperson said on Twitter.

The statement also notes that the Israeli army views the use of balloons with explosive devices "with great severity" and will continue to prevent attempts of their use.

© REUTERS / Mohammed Salem
Clashes With Israeli Forces Killed 135 Palestinians Since March 30 – Reports
According to Israeli media, there were no reports of any casualties as a result of the attack.

The situation on the Israeli-Gaza border has significantly worsened over the past several months. The Israeli side has been using lethal arms to suppress the rallies citing security concerns and putting the blame for the escalation on the Hamas radical movement, governing the Gaza Strip.