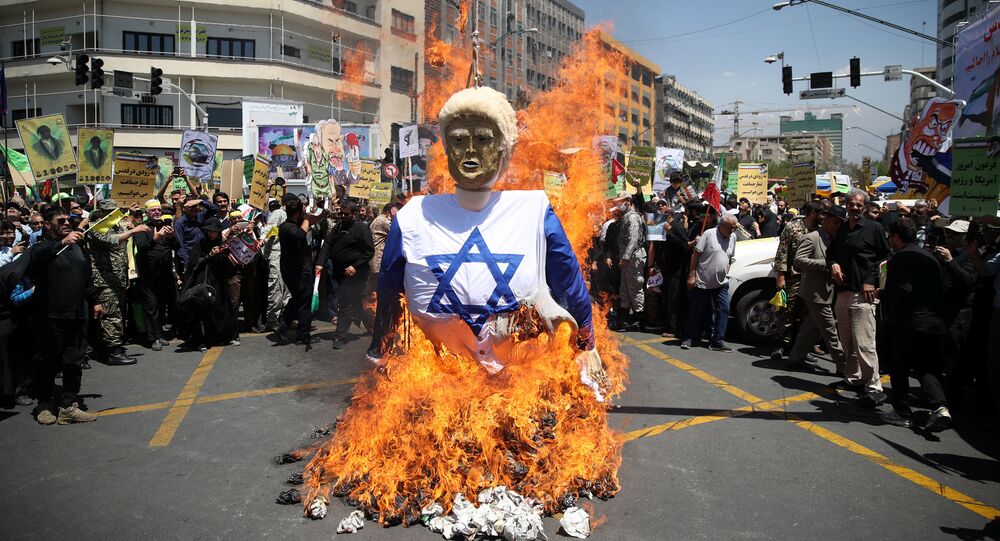 The president of Iran reportedly declared that the Israeli government won’t be able to feel safe while it continues to maintain its hold on Jerusalem.

As people in Iran and several other countries took part in the Quds Day rallies, Iranian President Hassan Rouhani declared that Israeli leadership can no longer feel safe, according to Press TV.

"The occupying and aggressive Israeli regime can never feel that it is in a safe place," Rouhani said.

© AP Photo / Ronald Zak
Iran Calls Israel's Nuclear Capabilities a Global "Threat," Urges IAEA to Put Tel Aviv on Notice
Rouhani also spoke against "US unilateralism", declaring that he intends to discuss this matter during the upcoming summit of the Shanghai Cooperation Organization, and branded the United States’ withdrawal from the Iran nuclear deal "illegal."

"That the United States is quitting an international treaty unilaterally and without any particular reason is an insult to the nations of the world and a violation of United Nations Security Council Resolution 2231," Rouhani said, adding that "the whole world has to feel that the approach that the US is adopting is a dangerous approach in international relations which undermines international treaties, and countries should not remain silent on this illegal move."

"If he fires at us, we will destroy his forces… There is a new calculus that has to take place," Netanyahu said, referring to the Syrian government and President Bashar Assad.

Earlier on Friday thousands of people took to the streets of numerous Iranian cities to express their support for the Palestinian state and condemn he violence that occurred during the Great March of Return, as well as the US move to relocate its embassy to Jerusalem.

Similar rallies were also held in Yemen, Iraq and Syria.

Originally instituted in Iran in 1979 in opposition to  Israeli's Jerusalem Day, Quds Day is observed annually on the last Friday of Ramadan and serves both as a gesture of support to Palestinians and a sign of protest against Israel’s control of Jerusalem and Israeli settlements being built on occupied territories.