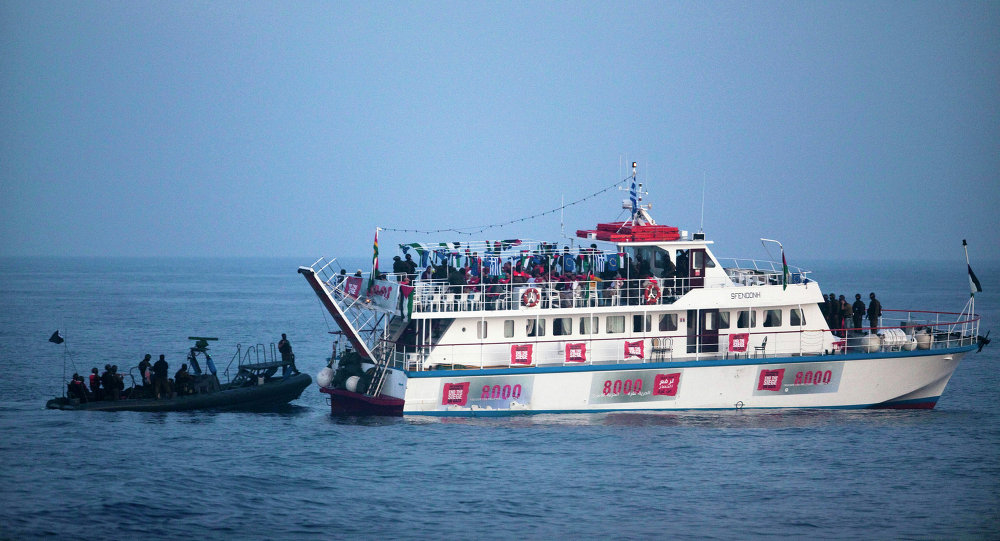 The Gaza Strip has been cut off from the outside world since 2007 via a concerted land, air and sea blockade by Egypt and Israel. Over recent weeks, thousands of Palestinians have been injured in protests near the Israeli border, and some Palestinians are now attempting to escape the blockade in search of medical treatment.

The Israeli Defense Force (IDF) announced that it has apprehended a boat attempting to breach its naval blockade of Gaza this afternoon, arresting around 17 Palestinians, who will now be returned to Gaza.

Meanwhile, the boat has been seized and will be transported to a Navy base in Ashdod.

The IDF also said that Palestinians injured in today's operation were receiving medical treatment, and blamed Hamas for this "propaganda" attempt.

Boats carrying over two dozen people were launched into the Mediterranean Sea from Gaza today, according to reports by the AFP news agency, though the target location is yet to be revealed.

Flotillas carrying supplies have previously been sent towards the Gaza Strip, but this is the first time activists have endeavored to transport Palestinians outside of the besieged territory during its 11-year blockage.

© CC BY 2.0 / Israel Defense Forces / Brother's Keeper Operation in Judea & Samaria
Israel to Ban Filming IDF Soldiers Amid Court's Promise to Scrutinize Activities
The organizers of the flotilla announced the planned evacuation a few days ago, insisting that only civilians would be evacuated.

Specific details haven’t been released to “ensure protection against potential Israeli aggression,” but organizers did say that a number of patients – including people injured in recent protests and others suffering with long-term illnesses – would be among those evacuated.

"[This initiative] is part of our efforts to peacefully resist and break the siege on Gaza. It is also a continuation of the demonstrations for the right of return of Palestinians," flotilla organizer Alaa Al-Battah said on Sunday.

At the same time, another organizer, Salah Abdul-Ati, said "the trip will carry the hopes and dreams of the Palestinian people for freedom.”

Tel Aviv heavily opposes such initiatives as it considers them to be in violation of its blockade, which it says it opted to impose to prevent terrorists operating in the area from obtaining weapons from abroad which could be used to target Israel.

Turkey & Israel: From Best Friends To Worst Enemies
Israel has resorted to using force to thwart similar “threats” to its sea blockade of Gaza. Tuesday's flotilla launch coincided with the eight anniversary of the Israeli Defense Forces’ (IDF) assault on a Turkish flotilla headed towards the Gaza Strip in 2010, resulting in the death of nine Turkish activists.

On May 27, Israeli Defense Minister Avigdor Lieberman hailed the construction of an underwater maritime barrier to prevent unauthorized flotillas and vessels from reaching Gaza or Israel as a major boost to the state’s national security, according to Haaretz.

"This barrier is one-of-a kind in the world. [It] will effectively block any possibility of entering Israel by sea. This further thwarts Hamas, which is now losing another strategic asset after investing huge sums in its development," he said.

The need for this maritime barrier, which is forecast to be completed later this year, emerged after Hamas militants entered Israel in 2014 during Operation Protective Shield.

UK Sales of Arms to Israel Hit Record in 2017 - Reports