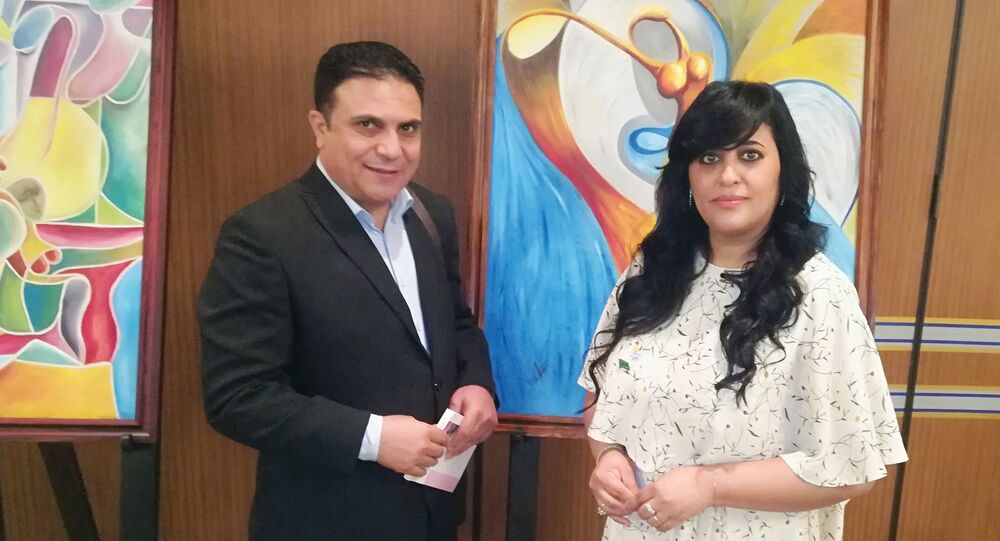 Saudi artist Donya al Saleh has asserted in an interview with Sputnik that the Gulf country has witnessed tremendous cultural changes in the past decade. She says the kingdom is becoming increasingly open and it welcomes emigrants to return to their home country, which now at long last boasts of “freedom.”

"When I just started my creative career, few people understood and showed interest in fine arts. Later on, with the advent and development of television and social media networks, this interest and understanding of art strengthened. Now we see the nation’s openness and readiness to absorb art. The kingdom hosts large-scale exhibitions, both on the national and international level; there is now competition, and there’s an audience," the artist remarked.

"Saudi Arabia has changed a lot; it has gone through a massive cultural transformation," she summed up.

Not long ago, Saudi artists had a really hard time, Donya recollected. "I am lucky to be born to a family, who are very open and have always marched with the times. My father is a renowned writer, he has always helped me and supported me in my dream. I made up my mind to become an artist despite everything," she noted.

She continued to say that there were plentiful problems along the way; "for instance, as I am a woman, I was banned from exhibiting my works. I was told not to paint, and even more so, not to show this to others. Today’s situation was preceded by 10 years of relative openness, when I faced quite a few problems," Donya remarked. She detailed one of her past exhibitions, which was to be carefully studied by a special state commission, which essentially didn’t allow her to partake. She later discovered that one of the members belonged to the notorious religious police, namely The Committee for the Promotion of Virtue and the Prevention of Vice. This made her take her artwork abroad.

"I have been working outside Saudi Arabia ever since, I may return home, as the kingdom sees a lot of positive changes. Even women are faced up with fewer and fewer handicaps," the artist noted. She went on to say that Saudi women would demonstrate their talents and capabilities to the fullest in the foreseeable future.

The kingdom, which has some of the world's strictest laws limiting women's rights, has engaged in a wide-ranging social reform program, in the framework of "Vision 2030," famously initiated by Crown Prince Mohammed bin Salman. Most importantly, it has, at long last, allowed women to drive and limited the overwhelming powers of the notorious religious police.

Furthermore, Saudi Arabia has introduced the first-ever female marathon, as well as lifted a decades-long ban on national movie theatres. The kingdom's General Entertainment Authority said in February that it would stage more than 5,000 festivals and concerts this year, roughly twice as many as in 2017, and invest around $64 billion in the social sphere in the next few years.

Separately, Sputnik earlier reported on 41-year-old Halah al Hamrani, a half-Saudi, half-American "wonder" woman, who now heads the nation’s first women-only fitness and combat studio and is determined to struggle for the rights of Saudi women to partake in sports and to ultimately gain social recognition in the predominantly conservative Muslim country.