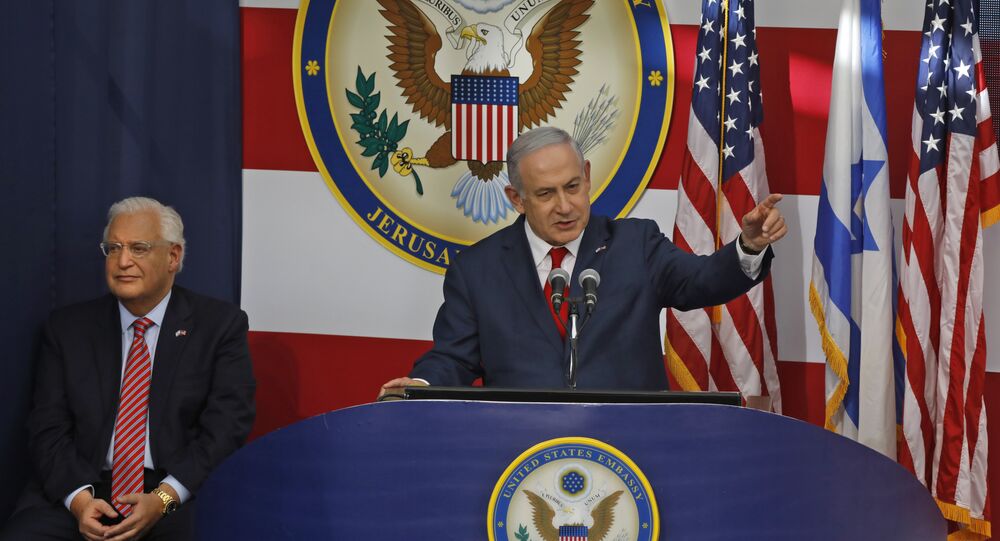 US Secretary of State Mike Pompeo has announced impending harsh US economic sanctions against Iran in his speech to the Heritage Foundation in Washington. According to him, they will be the "strongest in history."

Israeli Prime Minister Benjamin Netanyahu has praised the speech delivered by US State Secretary Mike Pompeo to the Heritage Foundation on May 21. Netanyahu said that Pompeo outlined a "very strong position" of the US in his address.

"We believe it's the only policy that can ultimately guarantee the security of the Middle East and peace in our region," the Israeli PM said.

Mike Pompeo addressed the Heritage Foundation with a speech regarding the new US policy towards Iran after Washington withdrew from the JCPOA. In his speech, he announced tough economic sanctions that would be the "strongest in history." Iranian President Hassan Rouhani slammed the speech, saying that Tehran would continue its path.

© REUTERS / Leah Millis
Rouhani on Pompeo's Speech: 'Who You Are to Decide for Iran and World' - Reports
He also noted that the new sanctions won't be lifted until Tehran's policies in the region change. Namely, Pompeo demanded that Iran stop supporting the Houthis, Hezbollah and Hamas and that it withdraw its forces from Syria.

Israel and the US have been blaming Iran for not complying with the nuclear deal, reached in 2015 by the P5+1 group, while Tehran has denied the claims as groundless, as its adherence to the agreement has been repeatedly confirmed by the IAEA. Most recently, the US decided to exit the Iran nuclear accord and impose sanctions on Tehran. The move came shortly after Netanyahu said earlier this month that Israel had obtained 100,000 pages of paper and digital documents, which, he said, irrefutably prove that Iran's nuclear program had a secret military component, codenamed "Project Amad."

In addition to this, Tehran has been accused by Washington and Tel Aviv of having a military presence in Syria and even building a base there, a claim repeatedly dismissed by the Islamic Republic, which insists that it has no troops in the Arab Republic, aside from having sent military advisors to the country in order to assist Damascus in its fight against terrorism.