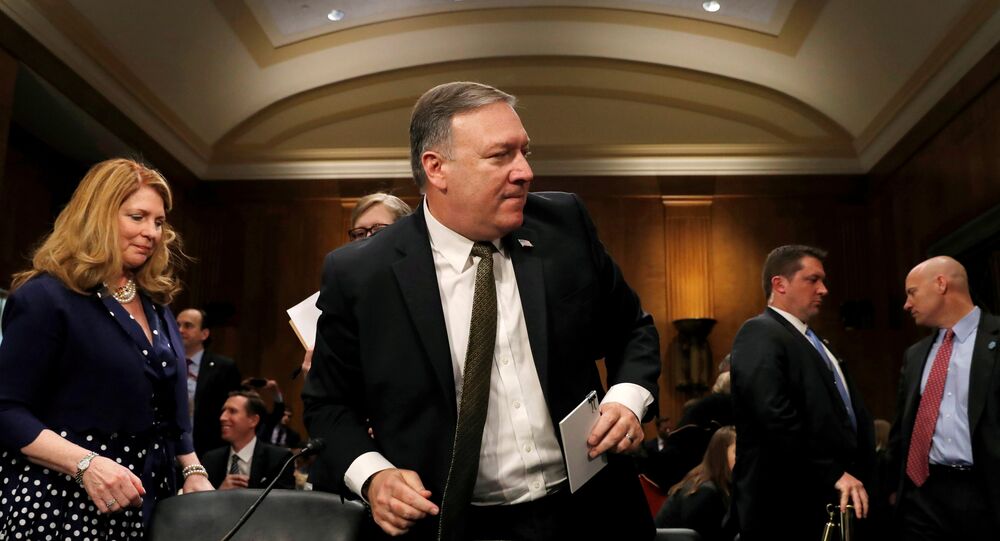 Recently appointed US Secretary of State Mike Pompeo has dedicated his first major foreign policy speech to Iran, its alleged aggression and to the JCPOA. Iranian President Hassan Rouhani has commented on Pompeo's address, as quoted by ILNA.

Iranian President Hassan Rouhani has slammed the Mike Pompeo's strategy on Iran, saying that the world cannot accept that Washington makes unilateral decisions for all nations.

"Who are you to decide for Iran and the world? The world today does not accept America to decide for the world, as countries are independent ... that era is over ... We will continue our path with the support of our nation," Hassan Rouhani stated as quoted by ILNA.

Iran's president has once again outlined the country's stance, saying that it would continue its path with the support of its nation.

US Secretary of State Mike Pompeo has addressed the Heritage Foundation in Washington on Monday with a speech concerning the future US strategy towards Iran. In his address, he vowed that the US would impose the "strongest sanctions in history" against the Iranian leadership. Pompeo declared that Washington would be explaining the new US policy to all countries, expressing hope that US sanctions will be met with support from US allies beyond Europe.

© Sputnik / Vladimir Fedorenko
Peace With a Price: Iran Promises EU to Adhere to Nuke Deal on One Condition
The new US secretary of state has threatened that all firms conducting business in Iran would be held accountable in view of the existing sanctions against the country.

The US official outlined 12 demands for Iran in the presented strategy, including the withdrawal of all its forces from Syrian territory and the termination of Tehran's alleged support to Houthi militants in Yemen.

Earlier in the day, a senior Iranian official has commented on Pompeo's statements, as quoted by Reuters, saying that the US was aiming to pressure Iran.

"America wants to pressure Iran to surrender and accept their illegal demands ... his remarks showed that America is surely after regime change in Iran," he stated.

Tensions between Iran and the US have escalated recently, following Washington's withdrawal from the JCPOA in May. The agreement, considered to be Obama's diplomatic victory, stipulated that Iran maintain a peaceful nuclear program in exchange for sanctions relief. US President Donald Trump has been critical of the deal since his presidential campaign, referring to it as "flawed," and has promised to impose new economic sanctions against Tehran for its "malicious activities."