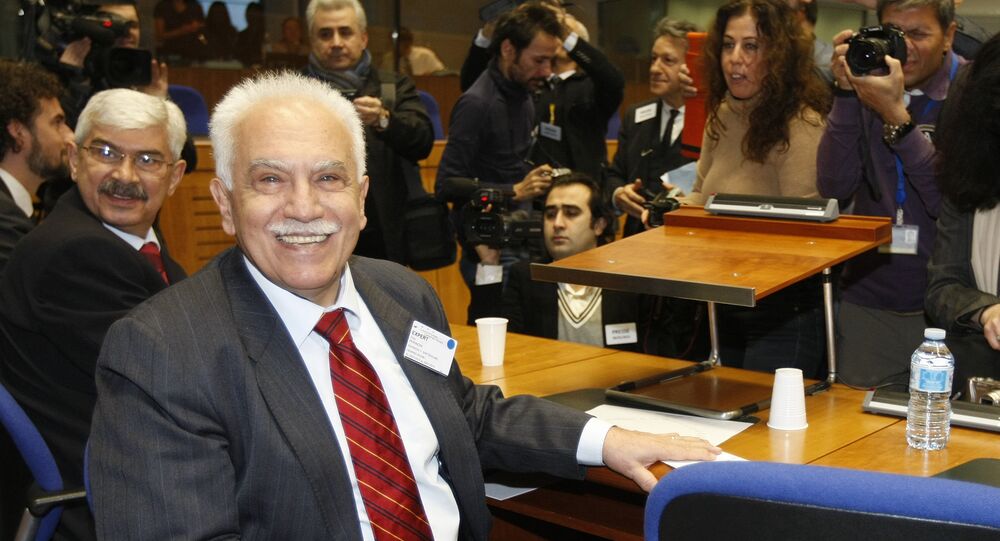 "NATO considers Turkey as an enemy, despite the fact that Turkey is a member of the alliance… Turkey will withdraw from NATO, the US aircraft from the Incirlik airbase will fly home, the base will come under the control of the Turkish military and there would not be any US military presence," Perincek said.

The politician recalled recent NATO drills, where Mustafa Kemal Ataturk, the first president of Turkey, along with incumbent Turkish President Recep Tayyip Erdogan were marked as enemies. Perincek also recalled US support for Kurdish militant groups as a reason for the Turkey-NATO spate.

The presidential candidate added that Washington has been trying to pressure Ankara over its cooperation with Russia with Iran in Syria.

"The United States will fail because the pivot of Turkey to the Atlantic region is impossible from now on, its real place is in Eurasia together with Russia, Iran, China, India and Central Asia states," Perincek claimed.

© AP Photo / Presidential Press Service/Pool
Erdogan on Assassination Attempt Plot: 'These Threats Won't Deter Us From Our Path'
Turkey has been a NATO member state since 1952. However in recent years tensions between Ankara and other alliance members, particularly Washington, have escalated amid certain political differences, such as the US support for Syrian Kurdish People's Protection Units (YPG), which Ankara regards as an extension of the Kurdistan Workers' Party (PKK), group labeled as terrorist and banned in Turkey.

Addressing the tensions with NATO, Perincek told Sputnik, that Turkey should strengthen military cooperation with Russia as there are threats against the two countries which are coming from the same source.

"In the area of security, we must act in the region in conjunction with Russia, because the threats against our countries are the same. Threats against Russia are linked to Crimea's reunification, while Turkey is facing threats from the Aegean Sea, the eastern Mediterranean and from the southern borders, and all these threats are directed by the same forces. Therefore, strategic cooperation between Turkey and Russia is necessary, including in the military sphere," the politician said.

© Sputnik / Vitaliy Ankov
'Logical Next Step': Why Turkey May Well Need Russian Pantsir System in Addition to S-400
According to Perincek, Turkey will not be able to defend itself with weapons from NATO countries and needs to cooperate with Russia and China in the defense industry. He also added, that in case of his victory Ankara would "buy in Russia not only S-400 missile systems but also MiG fighter jets and other weapons."

The candidate also noted, that the state of emergency, originally introduced after a failed coup in 2016, would be lifted only after Turkey resolved all domestic and external threats.

At the same time, he said that VATAN was against the use of the state of emergency for the crackdown on the opposition.

© REUTERS / Khalil Ashawi
Turkish Opposition CHP Party Wants Erdogan to Avoid Ratings-Boosting Military Operations
In July 2016, a group of the army officers attempted a coup in several major Turkish cities. Over 240 people were killed and more than 2,000 others were injured in the unrest, which Ankara blamed on the movement of Fethullah Gulen. Since the incident, the authorities have been detaining thousands of journalists, judges and human rights activists over their alleged support for the movement.
...
Reddit
Google+
Blogger
Pinterest
StumbleUpon
Telegram
WhatsApp
104