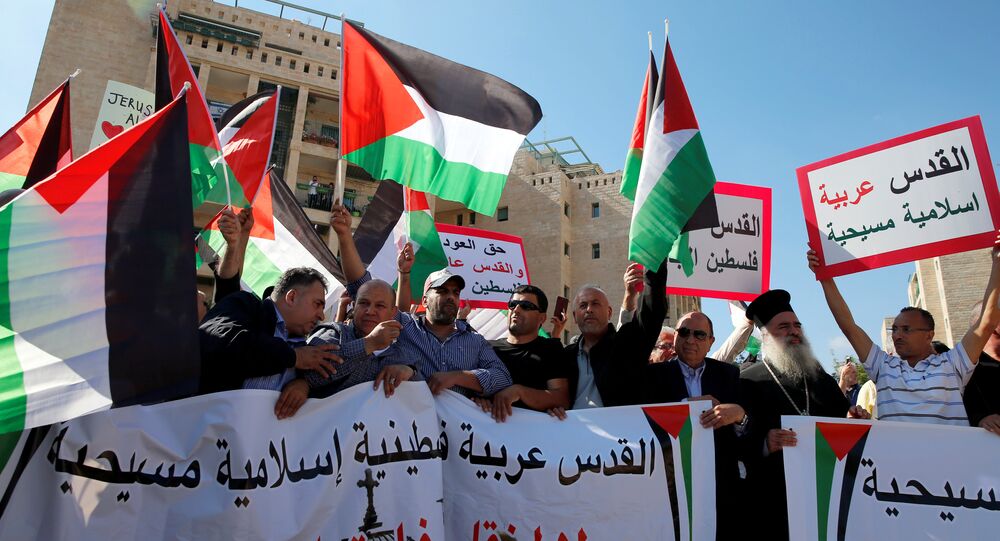 JERUSALEM (Sputnik) – The Palestinian National Authority has recalled its ambassadors to Romania, the Czech Republic, Hungary and Austria as these countries’ ambassadors attended the opening of the US embassy in Israel in Jerusalem, the foreign ministry said.

"The Palestinian National Authority Foreign Ministry has recalled its ambassadors to Romania, the Czech Republic, Hungary and Austria for consultations as ambassadors of these countries took part in a public function on May 13 on occasion of opening of the US embassy in Jerusalem after it was moved from Tel Aviv, and recognizing Jerusalem as Israel’s capital," the statement reads.

The day before, the Palestinian Authority recalled its ambassador to Washington in response to the relocation of the US embassy in Israel to the disputed city of Jerusalem.

READ MORE: WATCH Mass Protests on Both Sides of the Atlantic Against the Jerusalem Crisis

© REUTERS / Ronen Zvulun
Guatemala's Embassy Opens in Jerusalem After Relocation From Tel Aviv
Trump's decision on relocation of the US embassy to Jerusalem has sparkled unrest in the region, aggravating the Palestinian protests raging in the Gaza border region. The development resulted in violent clashes between the Palestinians and the Israeli forces, which left over 60 protesters dead and injured over 2,700 others. Many countries expressed their concern over the situation in Gaza, summoning Israeli envoys and urging Israel to exercise restraint.

The US diplomatic mission was officialy relocated to Jerusalem on Monday, which fueled bitter resentment in the Arab world as well as condemnation in the countries which speak for the so-called two-state solution, which involves the creation of an independent Palestinian state alongside Israel.