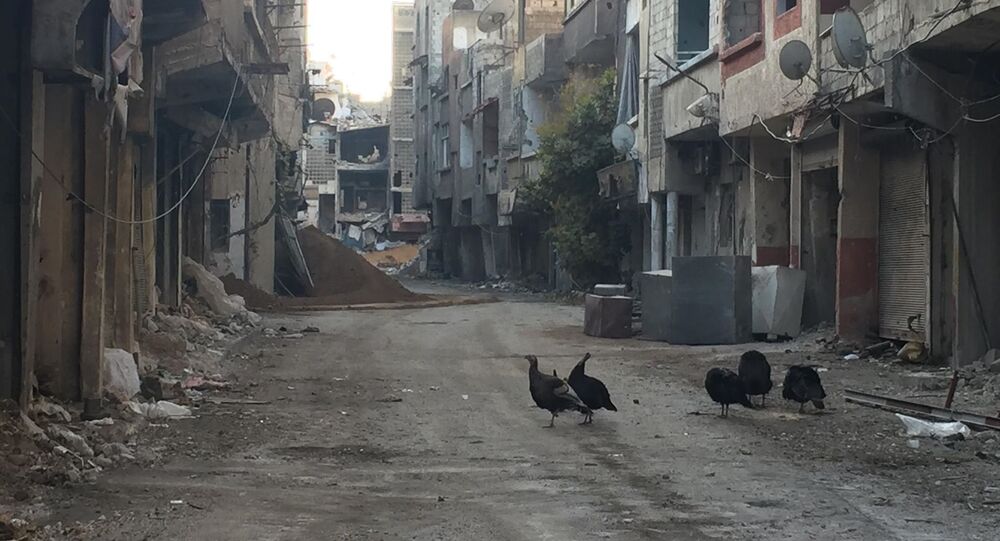 A property law passed on April 2 by the Syrian government made headlines in the mainstream media, with a number of outlets peddling the piece of legislation as an attempt by Damascus to prevent millions of Syrian refugees and apparent political opponents from returning home, by seizing their properties.

The law, which was ratified by President Bashar al-Assad last month after the Ministry of Local Administration and Environment submitted a draft version of the bill to Syria’s People’s Assembly, requires Syrians to prove their ownership of properties and land in specified war-torn areas of the country, primarily in parts of Damascus governorate, within 30 days, or face forfeiture.

© AP Photo / Markus Schreiber
Germany's Right-Wing AfD MPs Visit Syria Hoping to Repatriate Refugees
Sweeping territorial gains by the Syrian Army and the wider coalition of government forces gave rise to the need for such a law, as many of these recently liberated areas had been under the control of a coalition of hardline Islamist militant groups for around six years.

Both Al Jazeera and the Guardian insist that the Article 10 law is politically motivated, with the Syrian government allegedly aiming to solidify the demographic changes the multi-year war has brought about to give President Assad a more favorable hand.

READ MORE: Syrian Army is One of the Strongest Forces in Middle East – Iranian Official

However, this argument fails to take into account the secularity of the Syrian government, and the presence of Sunni Muslims in not only Syria’s parliament and President Assad’s cabinet, but even in senior positions of the intelligence apparatus, with Ali Mamlouk – a Sunni Muslim, of course – heading the National Security Bureau.
© REUTERS / Bassam Khabieh
China Poised 'to Become a Driving Force' in Syria's Reconstruction – Envoy
Additionally, the claims by the aforementioned media outlets fail to consider the incontrovertible need for such a law, as the Syrian government sets about the mammoth task of post-war nationwide reconstruction.

Before such projects can begin, authorities need to verify the ownership of properties in the areas which are set to undergo investment and reconstruction, to enable them to allocate properties upon the completion of such projects or offer compensation instead.

The Article 10 law is unequivocally needed to encourage private investors and enterprises to engage in public-private partnerships (PPP), as they’ll be reluctant to collaborate on such projects without an understanding of the ownership structure of areas they’re investing in.

The privately owned Syrian Law Journal (SLJ) criticized some western journalists and media outlets for misrepresenting the bill, via a journal entry on May 14, which also thoroughly explains this specific piece of legislation in the wider context of other supporting laws related to reconstruction, real estate development and zoning

“The narrative in western circles has been to frame this piece of legislation as an attempt by the Syrian government to muscle vulnerable communities opposed to it out of their rightful properties. The pick-and-choose approach that a number of journalists and observers have adopted when considering the provisions of the Urban Renewal Law in their articles or posts is quite conspicuous,” the entry reads.

The SLJ proceeded to insist that many media outlets “either mistakenly or dishonestly” attempted to portray the law as a politically motivated ploy by Damascus.

“They have failed to present a full comprehensive overview of the law and mention the safeguards it contains. Rather, these writers have either mistakenly or dishonestly opted to portray the rationale behind the law as a means to steal land belonging to opposition sympathizers and refugees who emigrated overseas while attempting to redraw demographic boundaries throughout Syria’s cities.”