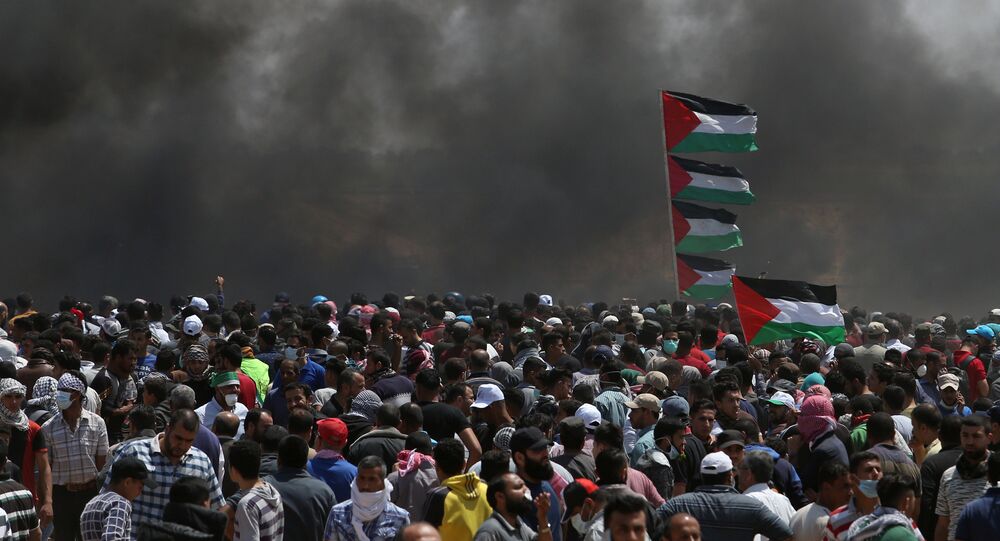 MOSCOW (Sputnik) - Iranian Foreign Ministry condemned on Tuesday the actions of the Israeli authorities against the protesting Palestinians in the Gaza Strip and called for an investigation in this regard in the International Criminal Court (ICC).

The ministry's spokesman Bahram Qassemi described the events in Gaza as the "killing of dozens of Palestinians" and an "unprecedented brutal massacre," stating that the demonstrations in Gaza were peaceful, the ministry said.

"He [Qassemi] called on regional and international organizations and bodies to take prompt action without any hesitation, condemn the crimes committed by the Israeli regime and introduce the Tel Aviv regime to the International Criminal Court as a war criminal," the ministry said in a statement.

Reacting to these statements, Israeli Ambassador to the United Nations Danny Danon said in a press briefing on Tuesday that Iran is supporting violent protests in the Gaza Strip.

"I can say to you today that Iran is supporting the riots in Gaza," Danon told reporters, adding that Israel Israel has information showing that Iran is funding Hamas, as well as evidence of connections between Hamas and Hezbollah.

The statement comes after violent clashes during Palestinian protests near the Gaza Strip border on Monday.

© AP Photo / Gali Tibbon/Pool
Israel Expels Turkish Consul in Jerusalem Amid Erdogan-Netanyahu Tit-for-Tat Accusations Over Gaza
The demonstrations took place amid the 70th anniversary of the formation of Israel and the move of US Embassy in Israel from Tel Aviv to Jerusalem. The Israeli military reported that they counted more than 35,000 participants in the riots in 12 sectors of the border. According to the Israeli military, the protesters had tossed improvised explosive devices and Molotov cocktails, burned tires and tried to break the border barriers, which prompted Israeli soldiers to fire at them in response.

The latest data from the Gaza Health Ministry shows that at least 61 protesters were killed in the clashes, more than 2,700 were injured, after what Palestinian leader Mahmoud Abbas declared a three-day mourning. The situation in the Gaza Strip will be discussed by the UN Security Council on Tuesday.

On March 30, Palestinians launched the Great March of Return protests near the Gaza Strip border demanding that refugees be allowed to return to their homes — the territory now occupied by Israel. Tuesday marks the 70th anniversary of the Palestinian exodus that occurred as a result of Israel's declaration of independence in 1948.

In December, US President Donald Trump recognized Jerusalem as the capital of Israel and ordered the US embassy to be relocated there from Tel Aviv. The decision fueled unrest across the Middle East and has been condemned by the majority of the international community.