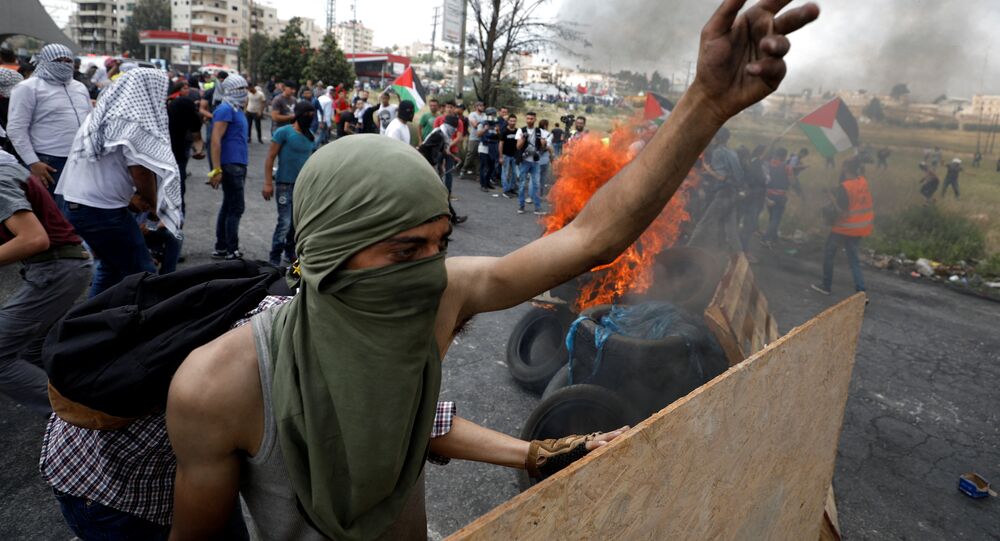 Protests happening now in Ramallah in light of the US Embassy move in Jerusalem. The demonstration is ahead of tomorrow's 70-year #Nakba commemoration. pic.twitter.com/djbVgQJxn0

Protesters wearing masks gathered near a checkpoint on the Israeli border and started burning tires.

Thread of some of the photos taken today at the Nakba protest, which marched from Ramallah to Qalandiya. #GreatReturnMarch #Nakba70 pic.twitter.com/2JPXDiy5VY

Other protesters threw stones at the IDF, while the Israeli troops responded with bullets and tear gas.

Shops located in the vicinity of the checkpoint have closed and traffic flow has been disrupted.

Several cars equipped with loudspeakers were seen moving across the town spreading calls to participate in the protests.

Near an Israeli checkpoint between Ramallah and the Beit El settlement, loudspeakers blast political songs — "Where are the millions, where are the Arabs, where is Arab blood?" — and clashes are getting going. @nazzal_rami pic.twitter.com/AOiK3fH514

For decades, Israel has been in conflict with the Palestinians, who have been seeking diplomatic recognition for their independent state on the territories of the West Bank, including East Jerusalem, which are partially occupied by Israel, and the Gaza Strip. In recent months the situation escalated amid US decision to relocate its embassy in Israel from Tel Aviv to Jerusalem.