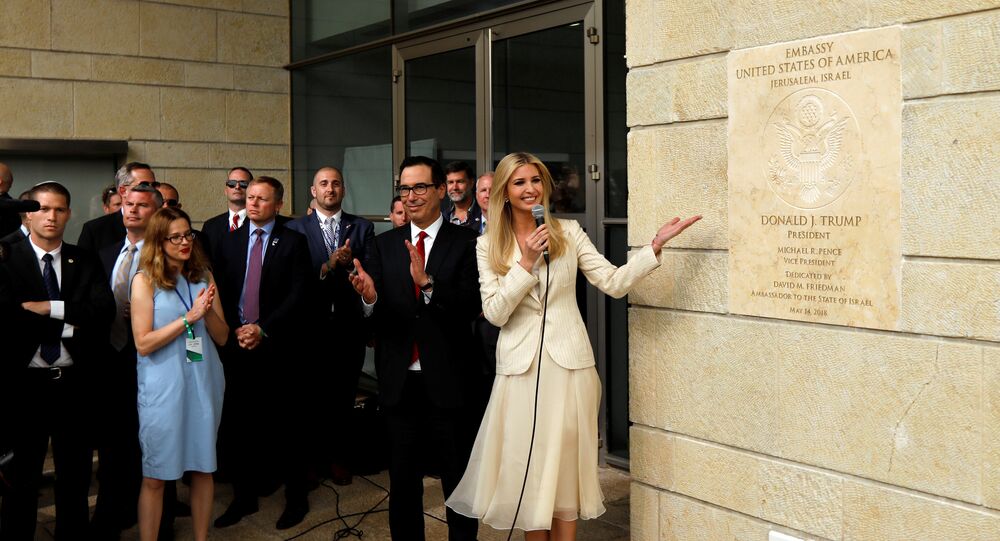 The United States formally opened its new embassy in Jerusalem on Monday, with high-profile members of Trump's administration and members of his family, but not Trump himself, in attendance for a grand ceremony including 700 guests, including Israeli President Reuven Rivlin and Prime Minister Benjamin Netanyahu.

The festive ceremony, held amid violent protests by Palestinians which have already claimed nearly 40 lives, including a 14-year-old boy, and wounded hundreds more, 27 critically, included a congratulatory video message from President Trump, who didn't attend the ceremony.

The president called the embassy move a "long time coming," and boasted that the new embassy's opening comes "many, many years ahead of schedule."

Israeli President Reuven Rivlin praised Trump for keeping a promise often made by US presidential candidates in the past. "The Israeli people thank you for keeping your word, for your courage, for your determination," he said.

© Sputnik / Amit Sha'al
WATCH: US Opens Embassy in Jerusalem Amid Violent Protests on Gaza Border
A visibly jubilant Prime Minister Benjamin Netanyahu, sat next to Ivanka Trump and presidential adviser Jared Kushner during the ceremony, said that today was a "glorious day."

"Remember this moment. This is history. President Trump, by recognizing history, you have made history," Netanyahu said. "The embassy of the most powerful nation on earth, the United States of America, our greatest ally, today its embassy opened here."

"We are in Jerusalem, and we are here to stay," Netanyahu added, to loud applause. "Thank you president Trump for having the courage to keep your promises," he said.

'US Can Be Trusted'

"By moving our embassy to Jerusalem, we have shown the world once again that the United States can be trusted," Kushner said. Kushner also made reference to the US withdrawal from the Iran deal, which he called "dangerous and once sided."

Monday's ceremony included a dual-language musical performance of Hallelujah and Peace Will Yet Come to Us All, as well as several prayers, including by controversial Southern Baptist pastor Robert Jeffress, who offered a prayer for Trump, and praised God and Jesus. "We thank you every day that you have given us a president who boldly stands on the right side of history, but more importantly on the right side of you oh God when it comes to Israel," he said.

© AP Photo / Ariel Schalit
Netanyahu Explains Israel Actions in Gaza by 'Obligation to Defend Its Borders' From Hamas
President Trump announced the controversial decision to move the US embassy in Israel from Tel Aviv to Jerusalem in December 2017, prompting condemnation across the Arab and Muslim world, and criticism from the countries which support a two-state solution to the Israeli-Palestinian conflict. The latter proposes an independent Palestinian state with a capital in East Jerusalem; the eastern portion of the city came under Israeli control after the Six-Day War of 1967. In 1980, Israel declared Jerusalem as the "complete and united" capital of Israel.

A majority of countries, including most of the US's allies, Russia, China, and others have their embassies in Tel Aviv. A December 2017 UN resolution requiring countries not to establish diplomatic missions in Jerusalem was supported by 128 member states, with 35 abstaining and only nine countries, including the United States, voting to reject the measure.

Israel’s President Reuven Rivlin has expressed gratitude to his Czech counterpart Milos Zeman for his support on the issue of recognition of Jerusalem as the capital of Israel, the office of the Czech leader said.

"Your excellency, allow me to thank you for your solid position on the issue of Jerusalem as the capital of the State of Israel, and for your support in possible transfer of the Czech embassy to Jerusalem, which we highly appreciate. We hope that it will actually happen in the near future," Rivlin's letter to Zeman, published on the Czech presidency website, read.

Protests across the Palestinian territories turned violent Monday over the embassy move, with protesters facing off against Israeli police, troops and riot control vehicles. An Israeli Air Force fighter jet reportedly struck Hamas targets in northern Gaza Strip Monday in response to what the military called "violent acts" along the security fence.