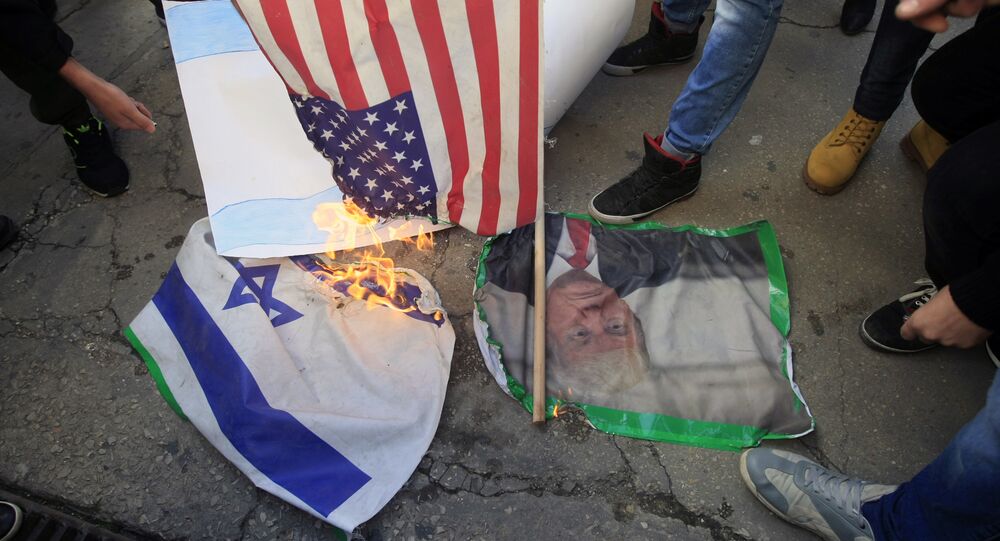 The US president announced on May 8 that Washington would withdraw from the Iran nuclear deal and re-impose sanctions against Tehran and every company that works with it. Iran slammed the US decision, saying the deal can't work without Washington adhering to it.

Commander of the Iranian Army Ground Forces Brigadier General Kiomars Heidari has forecasted what he described as the upcoming downfall of Israel, tying it with Trump's recent decision to withdraw from the JCPOA (also known as the Iran deal). He also claimed that the Iranian Ground Forces had a calendar which shows the time of the annihilation of Israel, reports Fars News Agency.

"The treatment of the nuclear deal by sill Trump will fail to produce the results desired by the Zionists and would rather speed up annihilation of the usurper regime," he alleged.

Earlier, the Iranian envoy to the UN, Gholamali Khoshrou, wrote an official letter of condemnation of the Israeli actions to UN Secretary General Antonio Guterres. According to him, Tel Aviv is responsible for supporting terrorist groups in Syria.

"Israeli reckless action in this instance only helped [Daesh] and other terrorist groups in Syria. [Recent bombings] clearly demonstrate their destructive policy in assisting those groups for the purpose destabilizing the region," the letter says.

The Iranian envoy further slammed the recent airstrikes conducted by the Israeli air force under the pretext of bombing Iranian troops allegedly deployed in Syria. He noted that Israel targeted "legitimately deployed Iranian nationals and interests" in Syria.

© AP Photo / Vahid Salem
'Open War Between Israel, Iran Would be a Regional, Global Disaster' - Professor
The development has further escalated the already tense relations between the two countries, with Tehran not recognizing Israel's right to exist and Tel Aviv claiming that Iran is developing nuclear weapons. In addition to this, Israel claims that Iran has a military presence in the war-torn Syria that it intends to use against Israel. Tehran denies the allegations, claiming that it is only sending military advisors and humanitarian aid to the Arab Republic.

The most recent Israeli airstrike took place on May 10. Tel Aviv claimed that it launched an attack in retaliation for rockets being fired at the occupied Golan Heights allegedly by the Iranian Revolutionary Guard's Quds Force. According to Israel, the airstrike destroyed almost all Quds Force facilities in Syria. The Syrian army reported that its air defenses had "shot down dozens of Israeli missiles," however several of them reached their targets. According to unconfirmed reports, several Syrian servicemen were killed and wounded in the strikes.

READ MORE: 'No Iranian Bases in Syria, Only Syrian Soldiers Were Killed' — Journalist

The Israeli air force conducted airstrikes against the Syrian T-4 airbase in February and April, claiming it had targeted "Iran's bases in Syria," which Tehran had allegedly been planning to use in order to attack Israel. Syria and Iran have slammed the attacks, which allegedly killed several Iranian military advisers.

US President Donald Trump announced on May 8 that the US was withdrawing from the Joint Comprehensive Plan of Action (JCPOA), an international agreement reached in 2015 by Iran, the United States, Russia, France, China, the UK, Germany and the EU. The agreement was aimed to prevent Iran from using its nuclear program to pursue the development of nuclear weapons and to ensure its peaceful nature.

'Open War Between Israel, Iran Would be a Regional, Global Disaster' - Professor

US, EU on Verge of Breakup as Macron and Merkel Vow to Counter Anti-Iran Move