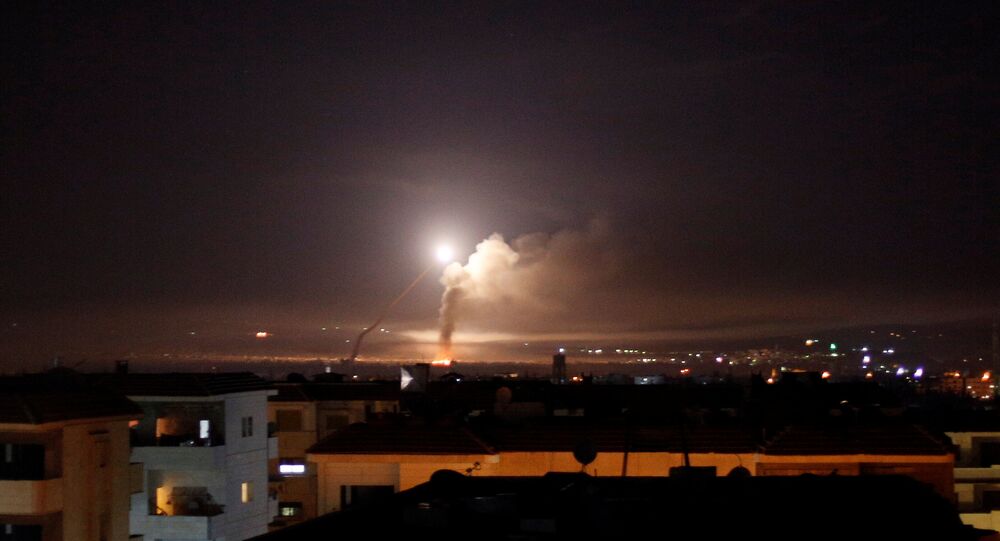 The Syrian Arab News Agency (SANA) reported, citing a military source that the army’s air defenses had “shot down dozens of Israeli missiles, preventing most of them from reaching their targets,” however, some of the rockets managed to hit radars and an ammunition depot. Israel, in turn, said it had retaliated against Iranian forces in Syria, which had launched around 20 rockets at Israeli frontline positions. SANA released the footage, showing the moment Damascus brought down Israeli missiles:

In the meantime, Israel's Defense Minister Avigdor Lieberman said that Tel Aviv’s forces had hit "nearly all the Iranian infrastructure in Syria" and stressed that no objects were struck on Israeli territory.

"We remain on high alert and vigilant, and we monitor Iranian activity in Syria. We do not want to escalate the situation, but we will respond to a new Iranian attack, we are ready to give a powerful response. We caution the Iranians against it," military spokesman Jonathan Conricus told reporters.

According to the Russian Defense Ministry, Israeli jets fired some 60 missiles at several targets in Syria in response to what Tel Aviv has described as an Iranian attack on Israeli-held Golan Heights.

© REUTERS / Alaa al-Faqir
Missile fire is seen over Daraa, Syria May 10, 2018
© AFP 2021 / JALAA MAREY
'If It Rains on Us, It'll Storm on Them': Lieberman Warns Iran After Israel's Massive Attack in Syria
The attack came less than 24 hours after the Syrian air defenses managed to intercept two Israeli missiles in the southern outskirts of Damascus in the al-Kisweh area. SANA reported that at least two people were killed in an explosion caused by one of the two interceptions, while western monitoring groups claimed that Tuesday night’s strikes had also left several Iranian nationals dead.

In the wake of the attack, a source at Beirut International Airport told Sputnik that Israeli aircraft had violated Lebanese airspace at the time of the suspected strikes; Tel Aviv, however, has refused to comment.

The SANA news agency has also published security camera footage showing the interception of an Israeli missile on Tuesday.