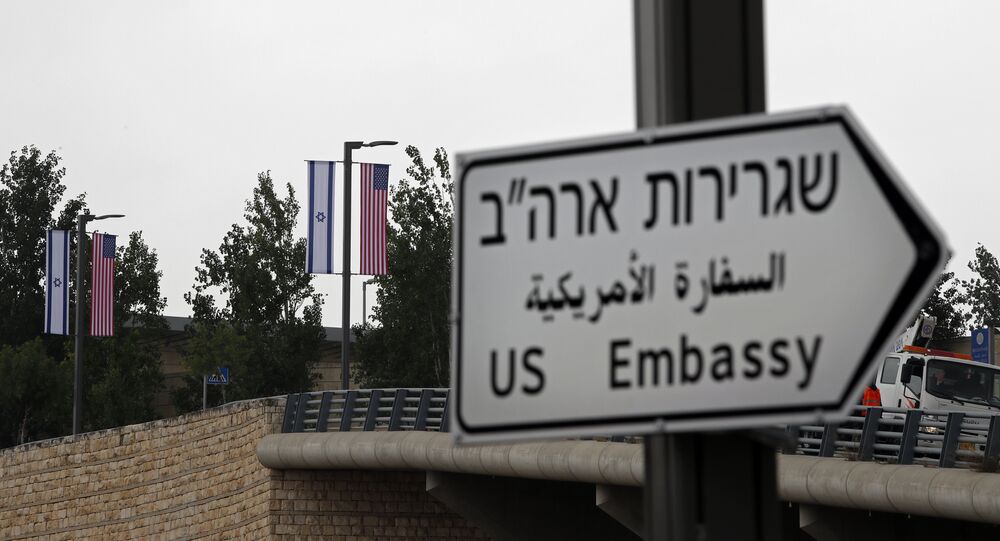 MOSCOW (Sputnik) - Jerusalem Mayor Nir Barkat has decided to rename a square near the future location of the US Embassy in Jerusalem after US President Donald Trump, the administration of Jerusalem said in a press release on Tuesday.

"President Trump has taken the decision to recognize Jerusalem as the capital of the Jewish people, to stand up for the truth and to do the right thing. Naming the square after the president is our way of showing love and respect for the president and the US people, who always stand by Israel," Barkat was quoted as saying in the statement.

The Jerusalem Municipality plans to hold an official opening ceremony of the renamed square with the participation of US officials in the coming months, the statement added.

According to the statement, the official name of the street will be renamed in honor of President Donald Trump.

READ MORE: Palestinian Authorities Urge to Boycott Opening of US Embassy in Jerusalem

The statement comes after Israeli Construction Minister Yoav Gallant said last month that he was thinking of naming a quarter in Jerusalem assigned to foreign embassies after Donald Trump.

© CC0
Paraguay to Move Its Embassy in Israel to Jerusalem in May - Tel Aviv
The relocation of the US Embassy is scheduled for May 14, the day Israel celebrates the 70th anniversary of its independence. The relocation will merely be symbolic in nature since it will take much longer to redeploy the US diplomatic corps in the new embassy.

In early December, Trump announced his decision to recognize Jerusalem as Israel's capital and instructed the US State Department to launch the process of moving the US Embassy, which is currently located in Tel Aviv, to Jerusalem.

The step has prompted criticism from a number of states, first and foremost Palestine and those in the Middle East, and triggered a wave of protests in the region.

'Let Him Dream': Palestinian FM on Israel's Claim to Move Embassies to Jerusalem