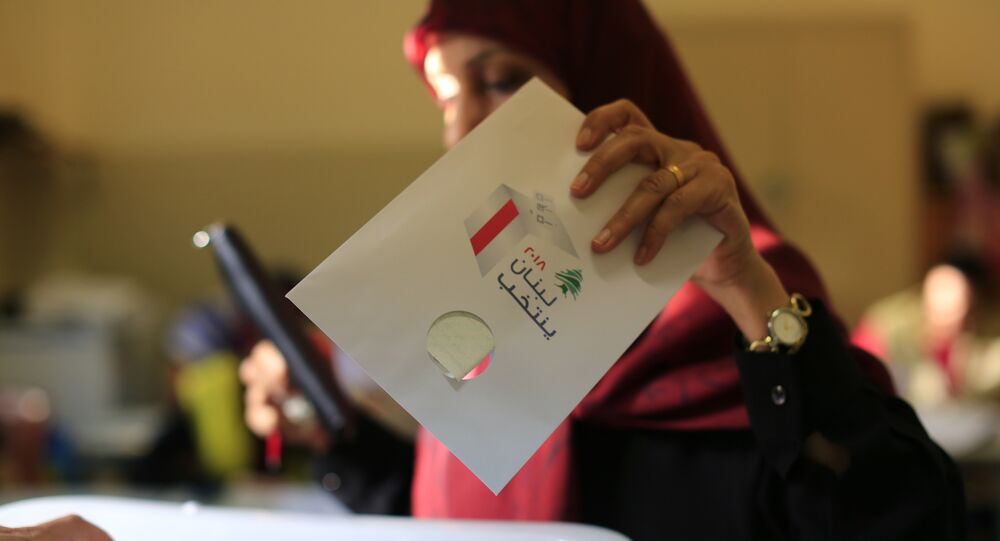 BEIRUT (Sputnik) - The Hezbollah Shiite party along with its political allies may secure a victory in the recent Lebanese parliamentary election, Al Mayadeen TV reported on Monday, citing preliminary vote results. The Hezbollah leader called it "political and moral victory" for the resistance.

Commenting on the general election Lebanese Prime Minister Saad Hariri on Monday said he was satisfied with the result of his Tayyar Al-Mustaqbal (Future Movement) Sunni party.

"The vote results provide the Mustaqbal with a bloc of 21 lawmakers in the parliament. I would like to tell you that I am satisfied with the results. If you want, I can tell you that we have won," Hariri said at a press conference in Beirut.

The prime minister stressed that he was an ally of Lebanese President Michel Aoun, who is a central figure in the Free Patriotic Movement (FPM) Christian party, though the differences with the Hezbollah Shiite party, a longtime ally of the FPM, would remain.

Preliminary Results of the Vote

According to Al Mayadeen TV channel, citing unofficial election results, Hezbollah and its ally Amal Movement Shiite party have won in all three municipalities in southern Lebanon, where their positions are traditionally strong. They also won in the second quarter of Beirut, the Lebanese capital, and in three municipalities of the Beqaa governorate.

Another longtime ally of Hezbollah, the Free Patriotic Movement, the central figure of which is Lebanese President Michel Aoun, has reportedly secured mandates in the majority of the country’s municipalities.

Therefore, the Hezbollah and Amal Shiite parties, in alliance with the Free Patriotic Movement, may secure over 60 parliament seats, which will be considered the majority.

Commenting on the election results, Sayyed Hassan Nasrallah, the leader of Hezbollah group called them "political and moral victory" for the resistance. As he specified, "the parliamentary presence" created by Hezbollah and its allies would guarantee the protection of the "resistance".

"From the beginning, we aimed for a large presence in parliament, first of all, to ensure political protection of the [Hezbollah] resistance. In general, following the election results, we can say that in terms of means of our election campaign and the right choice of political alliances we achieved what we were counting on," Nasrallah said, aired by the Al Manar TV channel.

According to Nasrallah, a new government will unite the army, Lebanese people, and the Hezbollah resistance. He stressed that the vote showed that it was impossible to exclude any party from the political process in the country.

"I call on everyone to calm down. We must settle our disagreements, even strategic ones. I urge leaders of [all] political forces to calm down and abandon provocative statements, as they may lead the country to a problem," Nasrallah said.

The Shiite leader also mentioned attempts to discredit Hezbollah in areas traditionally loyal to the party. He reiterated his call for the immediate launch of talks on the formation of a new government, urging to focus on the country’s interests, despite internal political differences.

On Sunday, Lebanon held its first general election since 2009. Within the nine-year period in between, the nation's parliament extended its mandate three times under the pretext of political instability. As many as 976 candidates competed for the 128 seats in parliament, which are distributed according to the ethnic-confessional principle between 11 groups. The election took place in 15 Lebanese regions.