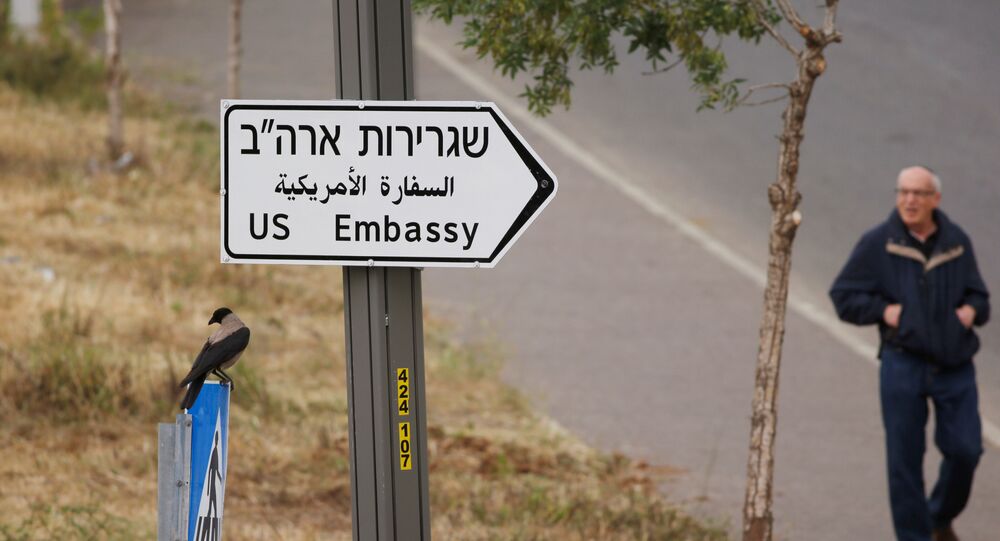 'This is Not a Dream, It's Reality': Jerusalem's Mayor Installs US Embassy Signs

In December 2017, US President Donald Trump recognized Jerusalem as Israel's capital and ordered to move the US diplomatic mission there; the move has been eagerly anticipated by Israel but was met with bitter resentment elsewhere, especially in the Arab world.

Jerusalem mayor Nir Barkat installed the first road sign stating "Embassy of the United States" a week before the relocation of the US diplomatic mission from Tel Aviv is due to take place. It is written in English, Hebrew and Arabic.

Signs appeared in the vicinity of one of the buildings of the American Consulate General, which on May 14 will replace the signboard of the embassy, in accordance with Donald Trump's decision.

USA 🇺🇸Embassy @usembassyjlm's signs, in English, Hebrew and Arabic, were installed by workmen close to the south #Jerusalem location of a US consulate building that will be repurposed as the embassy when m @USEmbassyIsrael is officially relocated on May 14 from #TelAviv pic.twitter.com/ZWk77T3WOr

"This is not a dream — it's reality!" Jerusalem's mayor said on his Twitter account, commenting on the installation of the signs. Barkat personally climbed a ladder to fix a signpost shaped like an arrow.

This is not a dream — it's reality! This morning, I installed the signs for the new #USembassy in #Jerusalem!

Jerusalem is the eternal capital of the Jewish people — and the world is beginning to recognize this fact!

© AFP 2020 / THOMAS COEX
Trump Not Planning to Attend Embassy Opening in Jerusalem – Israeli Minister
The American embassy will be moved to Jerusalem at Trump's behest. In December of last year, the US recognized the city as the official capital of Israel. The transfer of the diplomatic mission is scheduled to take place on May 14 — the anniversary of the 70th anniversary of the Israeli state. There will be a symbolic ceremony with a change of the signboard on the building. A full relocation of diplomatic staff and properties is likely to take more time.

The status of the ancient city remains a major problem, mirroring the Middle East conflict. The decision to relocate the US diplomatic mission was made back in 1995, however, the implementation had been repeatedly postponed by US presidents due to the sensitivity of the issue and the contested status of Jerusalem.

The ancient city is claimed as a capital by both Israel and Palestine, which are locked in a fundamental border conflict. The international community does not recognize these claims, since the UN resolution of 1947 defines Jerusalem as a "separated body."