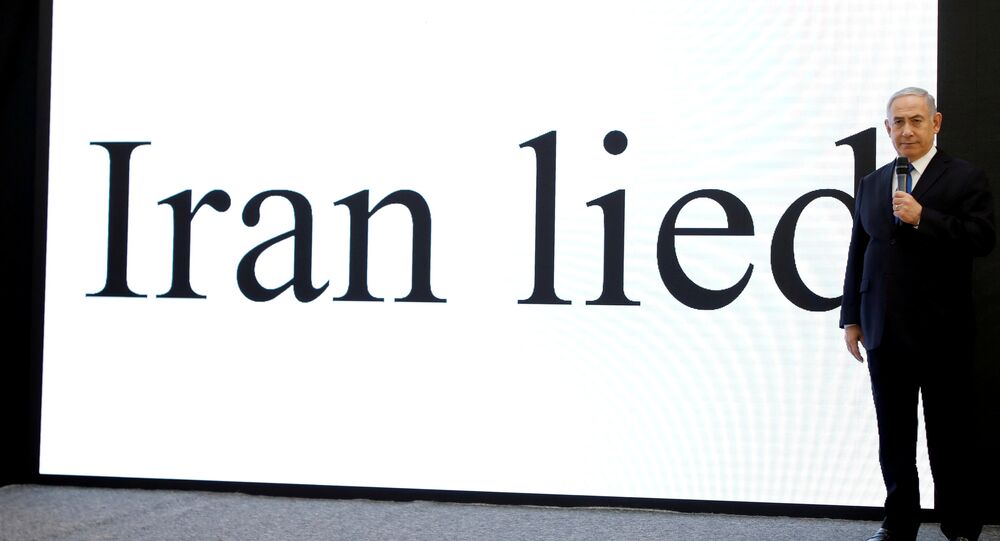 Israel's Remarks on Iran Sow Division Between Europe and US

Earlier this week, during an internationally-televised address, Israeli Prime Minister Benjamin Netanyahu said that the country’s intelligence service had gathered over 100,000 files allegedly proving that Iran has continued to pursue a covert nuclear program.

According to the Israeli prime minister, the intelligence service managed to obtain secret materials allegedly confirming the existence of an Iranian military nuclear project, dubbed Project Amad. Netanyahu claimed that Tehran failed to comply with its international obligations, having concealed the program with an eye to use it in the future.

Many, however, have suggested that Netanyahu is seeking to pressure US President Donald Trump to withdraw from the Joint Comprehensive Plan of Action (JCPOA), also known as the Iran nuclear deal, which, he said was “based on Iranian lies and Iranian deception.” President Trump has consistently criticized the “flawed” nuclear agreement with Tehran, threatening to pull the US out of it if the accord is not amended – he has promised to make a final decision regarding the JCPOA by May 12.

Commenting on Netanyahu’s speech, President Trump said he hasn’t ruled out Washington leaving the deal, while other signatories to the accord – France, the UK and Russia – have reiterated their unwavering commitment to the agreement and has called for its preservation.

© AP Photo / Mark J. Terrill
Trump Would Be Praising Iran Nuclear Deal if He Negotiated It - Ex-British Diplomat
The lion’s share of the expert and political community is trying to predict the situation surrounding the nuclear deal and Netanyahu’s revelations, with some suggesting that the “information made public by Israel dealt a fatal blow to the nuclear deal, and damaged the reputation of the parties to the accord, including Russia,” while others have said that there is nothing new in the prime minister’s announcement, as “this information was covered by the International Atomic Energy Agency (IAEA) a decade ago.”

In the meantime, there are those who suggest that the materials, presented by Israel are of no significance, because currently, neither facts and nor truth have influence on the Western decision-making. Last week, during an OPCW briefing in The Hague, 17 residents of Syria’s Douma told reporters that footage from the alleged site of the chemical attack, provided by the White Helmets, was staged – France and the UK refused to attend the conference, while the US turned a blind eye to the witnesses.

It appears that Europe is in the main obstacle to the US’ withdrawal from the deal and the visits of French President Emmanuel Macron and German Chancellor Angela Merkel to the White House have not made President Trump reconsider his position on the future of the agreement. Indeed, the Iran nuclear deal is an important matter for Europe, as it has signed multibillion contracts with Tehran since the sanctions were lifted.

Recent developments in the world, in the Middle East in particular, have revealed large-scale changes in relations between the United States and Europe; on the one hand, major European nations voice their unconditional support for Washington in spheres of “minor importance,” such as airstrikes against Syria in response to the alleged use of chemical weapons by the government forces in Douma, while on the other hand, Europe stands up for its interests in “more significant” matters, such as Nord Stream 2.

© Sputnik / Alexey Nikolsky
Putin, Macron Back Preservation of Iran Nuclear Deal
Consequently, it is highly likely that Washington will use the documents published by Israel to push for its agenda and gain Europe’s endorsement to kill the historic deal with Iran.

On July 14, 2015, the European Union and the P5+1 group of states – Russia, the US, France, China and the UK plus Germany – signed the JCPOA with Iran. The deal stipulates a gradual lifting of anti-Tehran sanctions in exchange for the Islamic Republic maintaining the peaceful nature of its nuclear program.