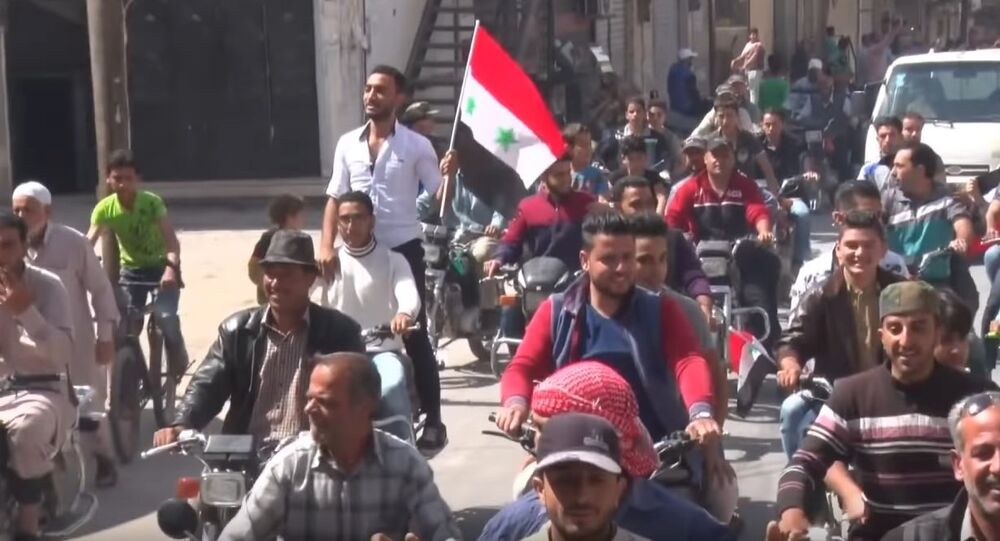 Volunteers in the Damascus suburban region of Eastern Qalamoun are looking forward to freeing the rest of their country from armed militias.

The Syrian Army has opened recruiting centers in recently-freed towns and cities in Eastern Qalamoun in Rif Dimashq governorate, with queues of volunteers forming at mobile recruiting stations in the town of al-Rugaib, a Rossiaya Segodnya correspondent on the scene reports.

"You know, Eastern Qalamoun was under the control of the militants for a long time, and today, when our soldiers and the Russian military drove them out of here, we decided that we could no longer sit on the sidelines," Tukman said.

© Sputnik / Yazan Kalash
Syrian Army Acquires Huge Depots of Militant Weapons and Munitions (PHOTOS)
"You can see how many people have come here today; no one forced them. It's their personal initiative. We know that there are still places in Syria where militants are present, but we are not going to tolerate them anymore, and want to make sure that our country is freed of this contagion," the official added.

Recent video footage out of Al-Rugaib has shown militants departing the area under the watchful eye of Syrian forces and Russian military police in accordance with a ceasefire agreement. An estimated 5,500 militants and their families have left the region, heading for an area of northern Syria under rebel control.

Syrian and Russian forces entered Eastern Qalamoun on April 25, arriving in the settlements of al-Dumayr, Jayrud and Al-Rugaib, and others, where they have been met with cheering crowds of civilians.

Syrian troops have been finding vast stocks of rebel weapons and ammunition in the area, many of them made in Israel, the US, and NATO countries.

Eastern Qalamoun's civilian population is celebrating their liberation from a rag-tag collection of Islamist militants including Jaysh al-Islam, a coalition of Islamist militia once controlling pockets of territory in Damascus and Rif Dimashq governorates. The Syrian military wrapped up an operation to clear Eastern Douma last month, prompting the militia and their families to evacuate to areas still under rebel control in the country's north.

Thanks to the Center for reconciliation of the warring parties, on the eve of about 2 thousand residents of the Eastern #Kalamun settled their status #Syria pic.twitter.com/TNDAaZCZSA

In the area of East #Kalamun, #Syrian flags are raised. The Government of the SAR has begun to restore infrastructure, the authorities have started working#SyrianArmy pic.twitter.com/h9QbOGbsID

Over 40 Hostages Reportedly Released in Syrian Province of Idlib