US Secretary of State Mike Pompeo has traveled to Jordan to discuss with the kingdom's authorities the situation around Syria, the Israeli-Palestinian conflict, and Iran nuclear deal.

"Secretary Pompeo met with King Abdullah on April 30 and reaffirmed the strong bond and strategic partnership between the United States and Jordan," Nauert said on Monday. "The Secretary and King Abdullah agreed on the urgent need to confront Iran’s destabilizing presence and malign behaviors in Syria and the region."

Pompeo and King Abdullah also discussed other regional issues such as defeating the Islamic State terrorist group (banned in Russia) and facilitating a peace deal between Israel and Palestine, Nauert said. 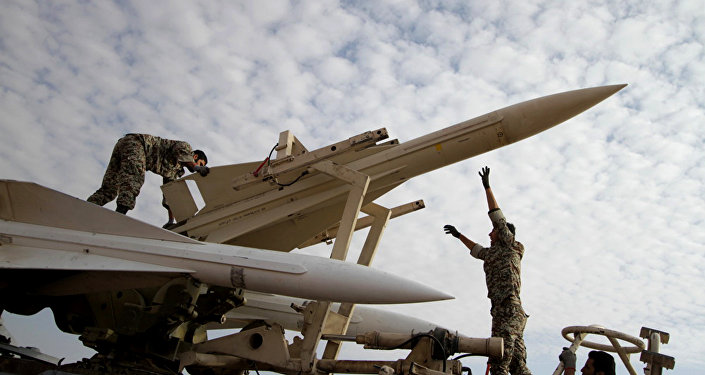 © AFP 2019 / ISNA/AMIN KHOROSHAHI
Israel Reportedly Won't Rule Out Attack on Iranian Soil if Hit by Iran's Proxies
They also discussed working to support bilateral ties between the United States and Jordan, she added.

Pompeo made three stops in the Middle East this weekend to discuss critical regional and bilateral issues with officials in Saudi Arabia, Israel and Amman.

The United States will help Jordan protect its borders as threats to the peace in the country continue to emanate from Syria, Pompeo at a joint press conference with Jordanian Minister of Foreign Affairs Ayman Safadi in Amman on Monday.

Pompeo reiterated that the US goal is to defeat the Daesh terror group.

"We must not let Syria again become a safe haven for the Islamic State* [Daesh] or for any other terrorist group," he said.

Pompeo also noted that another US goal is to ensure a safe and timely delivery of humanitarian aid and de-escalate violence.

© AFP 2019 / THOMAS COEX
Syria Attack: 'Nobody Looking for War, But Things Could Spiral Out of Control' - Israeli Analyst
The secretary of state said he discussed with Safadi the issue of "deterring the use of chemical weapons," and said they agreed that support should continue for a "political resolution to the conflict".

The United States is fully committed to the ceasefire arrangement in southwest Syria, Pompeo added.

Safadi hailed the creation of the de-escalation zone in the south of Syria an example of cooperation between the United States, Jordan and Russia.

Speaking of the conflict, Pompeo underscored ongoing US support for a two-state solution.

“We’re certainly open to a two-party solution. That is a likely outcome,” he said.

At the same time, the United States is calling on Israelis and Palestinians to restart political dialogue aimed at achieving peace in the Middle East, he added.

© REUTERS / Ibraheem Abu Mustafa
Stop 'Hunting': Palestine Urges UN to Respond to Killing of Protesters by Israel
Palestine seeks the establishment of a state on the territories of the West Bank, including East Jerusalem, which is partially occupied by Israel, and the Gaza Strip. The Israeli government has refused to recognize Palestine as an independent political and diplomatic entity, and continues to build settlements in occupied areas, despite objections from the United Nations.

Peace efforts began in the 1970s, culminating in the 2003 road map for peace proposed by the Middle East Quartet — the United States, the United Nations, the European Union and Russia. Since then, the two-state solution has been the main objective for mediators.