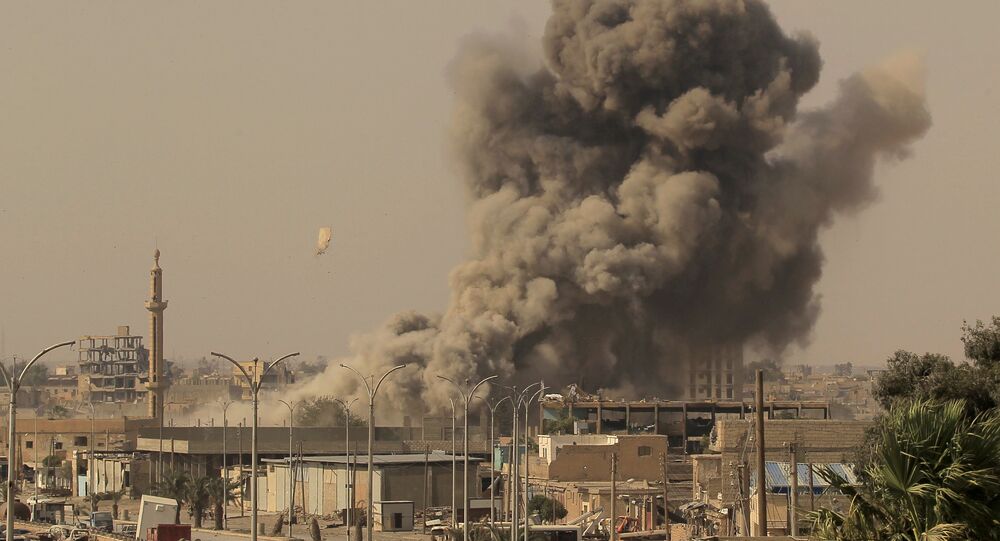 DAMASCUS (Sputnik) - Several Syrian military bases have been struck by missiles in the Hama and Aleppo provinces, a source in Syria law enforcement told Sputnik.

The UK-based Syrian Observatory for Human Rights reported that missile strikes on arms depots in northern Syria had killed 26 servicemen fighting alongside government forces, most of those killed were Iranians. However, the Iranian Tasnim news agency, citing an unnamed source, has denied the fact of missiles hitting Iran's base in Syria, saying that "all these reports over attack on an Iranian military base in Syria and the martyrdom of several Iranian military advisers in Syria are baseless."

An opposition source told Reuters that an army base, which was hit by a missile attack, was used as a recruitment centre for Iranian-backed militias who fight alongside forces of President Bashar al-Assad.

Earlier, a source in Syria's law enforcement told Sputnik that "the arms depot of the 47th brigade of the Syrian army was attacked near Hama." "Powerful explosions and major fire have occurred as a result," the source added.

This video shows explosion in the ammunition depot of #Syria Arab Army's 47th Brigade in South of #Hama after the #Israel Air Force (#IAF) airstrike at the #IRGC forces in the base almost 40 minutes ago. pic.twitter.com/dh1svPynXN

​According to the Surya TV channel, Syrian army positions have been attacked in a missile strike, conducted at approximately 20:30 GMT.

© AP Photo / Bilal Hussein
Israel Warns of 80,000 Iran-Backed ‘Extremists’ Operating in Syria
Rami Abdel Rahman, the head of the Syrian Observatory for Human Rights stressed that "given the nature of the target, it is likely to have been an Israeli strike."

Earlier on Sunday, Israeli Defense Minister Avigdor Lieberman stated, as quoted by Haaretz, that Israel would continue to maintain that it had freedom of operation in Syria.

"We have no intention to attack Russia or to interfere in domestic Syrian issues. But if somebody thinks that it is possible to launch missiles or to attack Israel or even our aircraft, no doubt we will respond and we will respond very forcefully," he said at an annual Jerusalem Post conference.

On April 9, Israeli jets struck Syria's T-4 airbase, killing seven Iranian military advisers operating in the country on behalf of the government, according to the Russian Ministry of Defense.

Damascus has repeatedly condemned Israel's attacks on its soil, branding them a violation of the country's sovereignty.