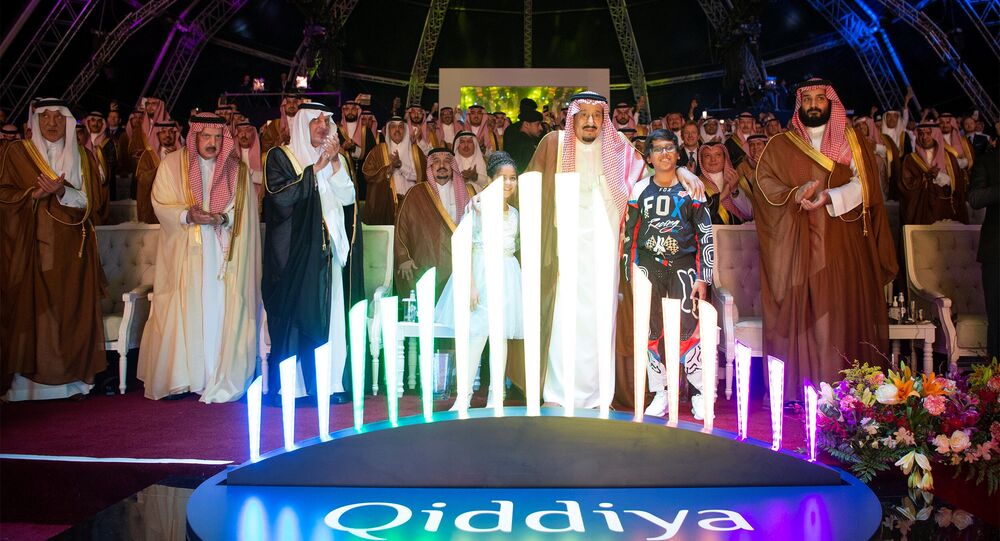 The project is seen as part of an all-embracing reform and massive innovative investment program pegged "Vision 2030," introduced by Crown Prince Mohammed bin Salman, who was among the guests at the launch ceremony on Saturday evening.

King Salman of Saudi Arabia has kicked off construction of an "entertainment city" near Riyadh, which is yet another step in a bid to help the kingdom diversify its economy, which is still dominated by oil trade.

The project, which is designed to be similar to Disneyland, is due to be rolled out on a vast plot of land of roughly 334 square kilometers, namely in Qiddiya, which lies to the southwest of Riyadh.

#KingSalman has today placed the first block of the giant #Qiddiya project, which will become a world-class sporting entertainment destination#QiddiyaGroundBreaking pic.twitter.com/pEcRiwc1xG

The project, which oversees the construction of theme parks, motor sport facilities and an area for safari trips, is hoped to draw foreign investments and attract about 17 million visitors by 2030.

Earlier this month, also along the lines of the Crown Prince’s brainchild – the innovative "Vision 30" program – the authorities announced their decision to open the first public movie theatre, thereby lifting a 35-year ban on these entertainment facilities in the country.

During the grand opening, guests attended a red carpet gala before being invited to watch Marvel’s superhero movie "Black Panther" on the big screen in a 250-seat cinema hall in the capital’s business district.

Learn more about @qiddiya, the brand new #Saudi entertainment city that will usher in a new era of entertainment, leisure and #tourism in the Kingdom of #SaudiArabia.

"Vision 30," the wide-ranging social and cultural liberalization program, among other things, includes increased support for sports and entertainment, as well as new opportunities for women.

More specifically, the country has finally granted women the right to drive and serve in the army, as well as limited the powers of the religious police.

In early March, the kingdom also saw the first-ever female marathon take place in Saudi Arabia, which is yet another step in Saudi Arabia's universally-praised sweeping modernization effort.

In February, Saudi Arabia's General Entertainment Authority said it would stage more than 5,000 festivals and concerts in 2018, which is essentially twice as many as compared to last year, and inject $64 billion worth of investments into the sector in the next several years.

The kingdom also seeks to bring three high-tech "giga projects" before investors, although they are expected to be partly funded by sovereign funds. Separately, the kingdom has made public blueprints for NEOM, Saudi Arabia’s upcoming Silicon Valley.