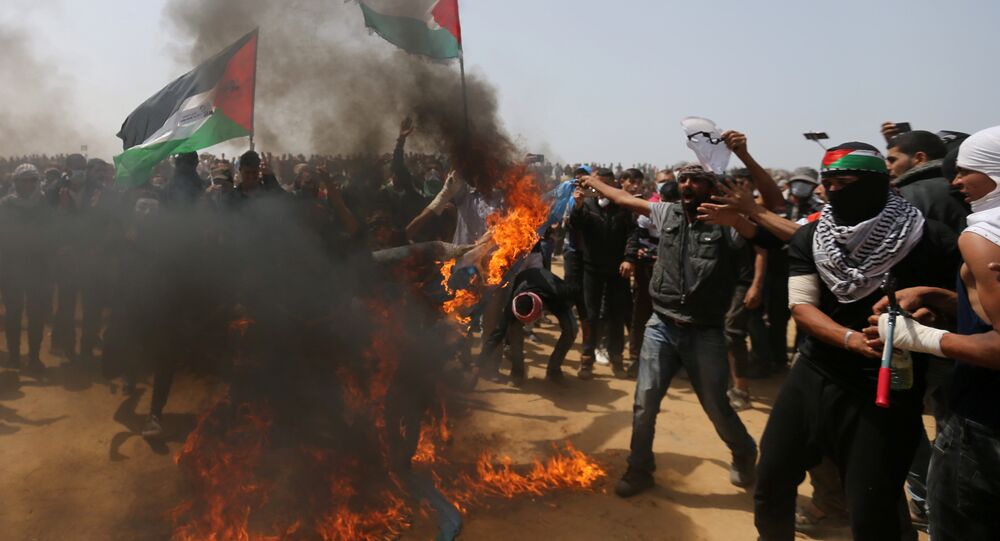 At least eight Palestinians have been injured in the new outbreak of clashes with the Israeli forces, while thousands came under the use of teargas, Ashraf Kedra, the spokesman for the Health Ministry in Gaza, told Sputnik on Friday.

"There are eight people injured by shooting, while hundreds suffered from the use of gas in various districts of the eastern Gaza border," Kedra said.

As the local Ramallah news previously reported, in Northern Gaza protesters broke through a security wire in the east of the Jabalia camp. The media outlet informed that Israeli troops have released a large number of tear guns at protesters.

Palestinian protesters fired dozens of rubber tires near the border.

For five consecutive weeks, Palestinians have been protesting along the border with Israel in a demonstration dubbed the Great March of Return against their displacement and the siege of the Gaza Strip. The protests are expected to last until mid-May.

According to UN figures, 42 Palestinians have been killed and over 5,500 injured during the past few weeks of protests.

Earlier, the Israeli forces were using firearms against most aggressive protesters, explaining their actions by the need to protect the state border. The Israeli authorities have denied accusations of excessive use of force and ignored calls for an international investigation into what many see as bloodshed.

Reacting to the ongoing protests, UN High Commissioner for Human Rights Zeid Ra'ad Hussein expressed concern on Friday about the growing number of victims and the excessive use of force by the Israeli forces during mass protests of Palestinians at the Gaza-Israel border.

"Warnings by the United Nations and others have seemingly gone unheeded, as the approach of the security forces from week to week does not seem to have changed… The loss of life is deplorable, and the staggering number of injuries caused by live ammunition only confirms the sense that excessive force has been used against demonstrators," Hussein said in a statement.

The commissioner also expressed concern about the reports of "unusually severe injuries" and Israel refusing permits to leave for those seeking treatment outside Gaza.

"I am extremely concerned that by the end of today… more unarmed Palestinians who were alive this morning will have been killed, simply because, while exercising their right to protest, they approached a fence, or otherwise attracted the attention of the soldiers on the other side," Hussein underlined.