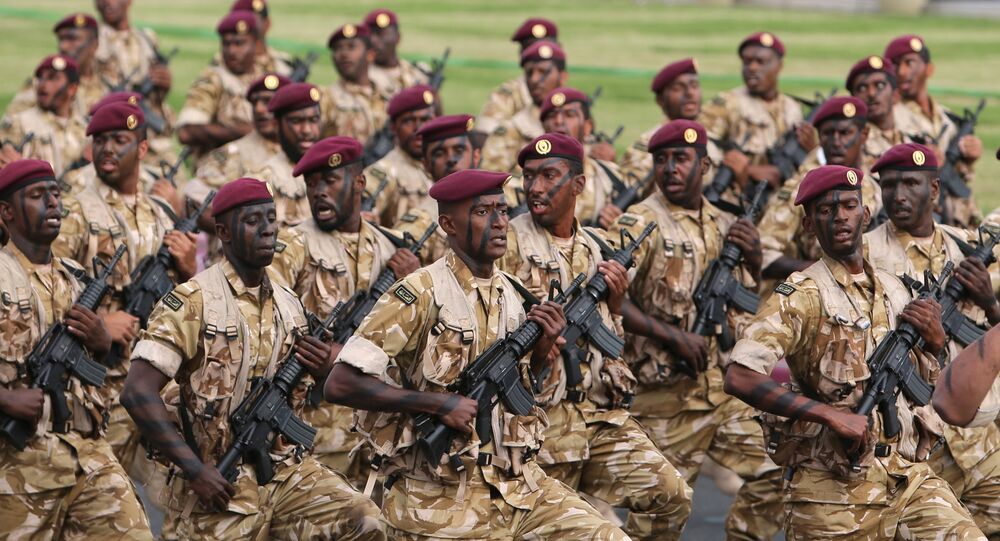 Iranian Foreign Minister Mohammad Javad Zarif’s adviser, Hussein Sheikholeslam, has commented in an interview with Sputnik on the possible cancellation of the nuclear deal signed with the P5+1 countries in 2015 as well as the situation in Syria in light of US statements about the possible deployment of Arab states’ forces there.

Deployment of Arab Forces in Syria

Sheikholeslam said that Qatar will make a mistake if sends its contingent to Syria as such a deployment would worsen the situation in Syria.

"We categorically oppose the deployment of any troops to Syria, because their goal will be the same as that of the US servicemen in Syria — to complicate the crisis," the official said.

The interview comes in the wake of the Tuesday meeting between French President Emmanuel Macron with US President Donald Trump in Washington, where the Iran nuclear deal among other issues was discussed.

© AFP 2021 / FAYEZ NURELDINE
Arab Fighters Instead of US Troops? Alliances in Mid East Are Like Shifting Sand - Professor
Trump reiterated that he was considering the withdrawal of American contingent in Syria. The announcement was followed by the statement of Saudi Foreign Minister Adel al-Jubeir, who said that Doha has to send troops to Syria if it doesn't want to be deprived of US military support. He noted that the Qatari government would be overthrown in less than a week without US support.

The Wall Street Journal reported citing officials last month that the US administration was planning to replace its forces in Syria with Arab contingent. Riyadh afterwards said it was ready to send troops to Syria.

"If America withdraws from the JCPOA (Joint Comprehensive Plan of Action), it will suffer, because it will lose the world’s trust. If an agreement is reached with a specific state, and then a new government arrives, it is illogical to believe that it can torpedo its obligations. America will suffer in the first place, as the world won't rely on cooperation with the authorities of this country," Sheikholeslam told Sputnik.

The aide has reiterated that Iran will pull out of the JCPOA if the US does so, adding that he didn't believe Washington would withdraw from the agreement.

© Sputnik / Aleksey Nikolskyi
Iranian President Warns Trump: If Nuclear Deal Betrayed, There'll Be Severe Consequences
Macron said he wanted to work on a new agreement with Tehran regarding its nuclear program. According to the French president, the new agreement will include four points: the blocking of the Iranian nuclear program until 2025, a longer ban on any nuclear activity, the termination of Iran's ballistic program and the creation of conditions for political stability in the region.

Donald Trump previously described the Iran nuclear deal, which was negotiated by former US President Barack Obama’s administration, as perhaps the worst deal in US history and threatened to withdraw the United States from the agreement if it was not amended.

China, Germany, France, Russia, the United Kingdom and the United States — collectively referred to as the P5+1 group of nations — signed the JCPOA with Iran in July 2015. The accord stipulated a gradual lifting of anti-Iranian sanctions in exchange for Tehran maintaining the peaceful nature of its nuclear program.