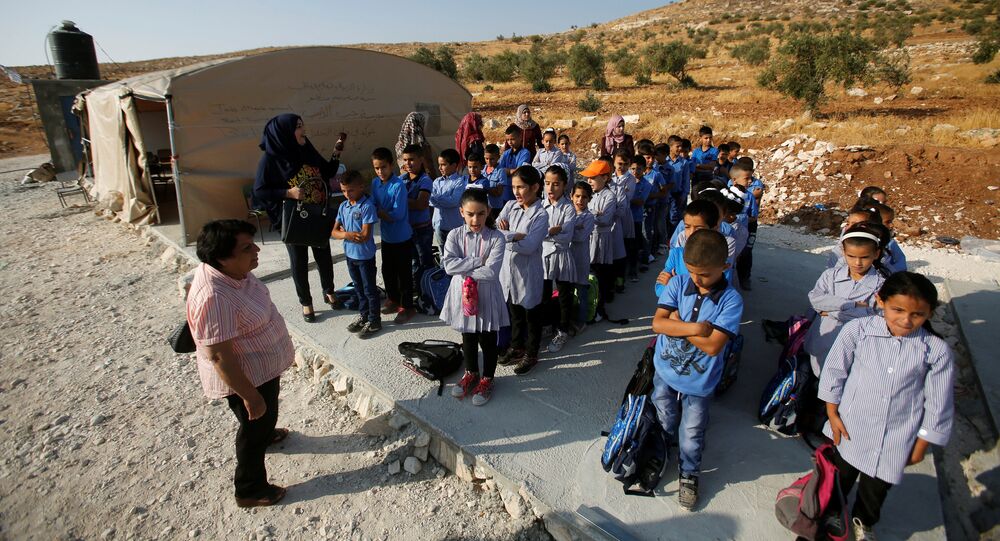 MOSCOW (Sputnik) - Israel’s policy of demolishing schools in the West Bank and denying the Palestinians building permits for new ones violates local residents’ right to education and pressures Palestinians to leave the Israeli-controlled areas, which may be ultimately qualified as an international crime, Human Rights Watch said Wednesday.

"Israeli authorities have been getting away for years with demolishing primary schools and preschools in Palestinian communities. The Israeli military’s refusal to issue building permits and then knocking down schools without permits is discriminatory and violates children’s right to education … Israeli officials should be on notice that razing dozens of Palestinian schools not only can block children from getting an education, but may be an international crime," Bill Van Esveld, senior children’s rights researcher at Human Rights Watch said, as quoted in the watchdog’s statement.

More than a third of Palestinian communities in the West Bank's Area C, where the Israeli military has exclusive control over building under the 1993 Oslo accords, currently do not have primary schools.

Israel justifies its demolition policy on the grounds that they were built without permits from the military, while zoning only one percent of Area C for the building of educational facilities, according to the press release.

As a result, 10,000 children attend school in tents, shacks, or other structures without heating or air-conditioning, the watchdog noted, citing the UN data.

© AP Photo / Ariel Schalit
Allegedly Palestinian Drives Car Into Crowd in West Bank, Casualties Reported
Thousands of Palestinian children have to walk several kilometers to school at the risk of facing harassment by settlers or the military, which leads to some parents taking their children out of school, with a disproportionate impact on girls, according to the watchdog.

The watchdog concluded that Israel’s demolitions of schools along with encouraging the building of new Israeli settlements in the West Bank, were part of a broader policy aimed at forcing Palestinians to leave their communities, stressing that the International Criminal Court should thoroughly look into the issues as part of its examination into the situation in Palestine.