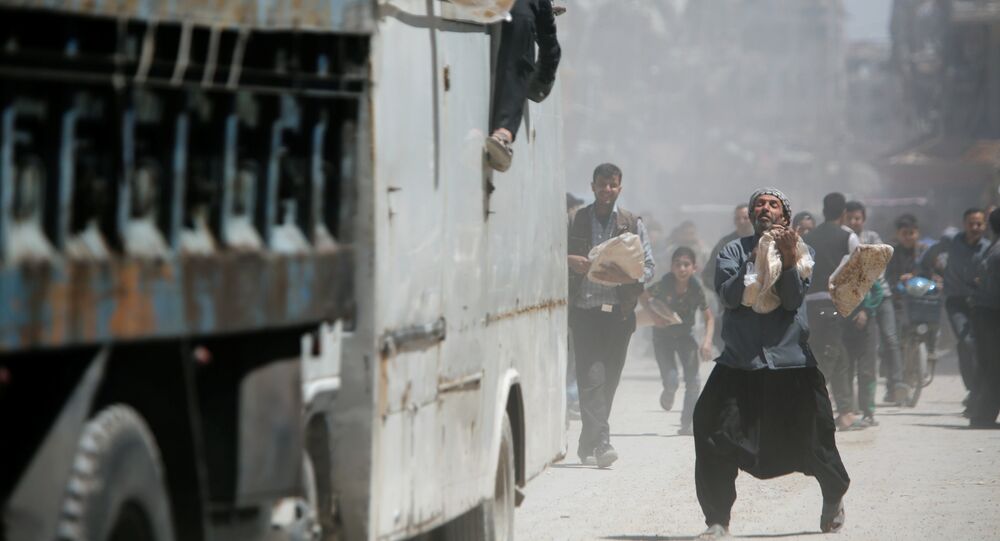 Uli Gack of the German TV network ZDF visited Syria, and reported on air that residents of a sizable refugee camp who had fled Douma insist that the alleged April 7 chemical attack had been staged by the terrorists. Following the attack, the US, UK and France launched an airstrike on Syria, claiming the government had violated international law.

The German TV reporter Uli Gack visited a refugee camp, where about 20,000  people from East Ghouta and Douma have fled. According to the reporter, people from there were convinced that the chemical attack, which the Syrian government has been blamed for, was staged by terrorists.

According to the former Douma residents cited by the ZDF reporter, the attack site was a Daesh* command post. The terrorist group had placed chlorine gas balloons there on purpose, so that they would explode if struck by government air forces, facilitating allegations of a deliberate government chemical attack.

The reporter also said that people from the camp told him there had already been such provocations in Douma. They said that some kind of training, as the journalist called it, had taken place, when people had been exposed to gas. This was filmed and later distributed as evidence of the attack.
Gack wouldn’t vouch for every sentence of these reports, but he also pointed out that it seemed there was something in it. In his report from Syria, he also talked to the doctors from the hospital which was featured in the alleged video evidence of the attack, distributed by the White Helmets. The medical men told the journalists that they had noticed no signs of gas poisoning among the reported victims.

The reports from the refugee camp correspond to the recent findings of the Syrian government forces in the Damascus suburb of Douma. An ongoing search operation discovered a series of underground rooms that terrorists who were recently driven from the area allegedly used to make chemical weapons.

Last week, a fact-finding mission of the OPCW visited Douma to collect samples in a bid to investigate the alleged April 7 chemical attack, attributed to Bashar Assad’s government.

The Syrian government denied the allegations for this incident, and earlier in March, the Russian Defense Ministry had warned that terrorists in Syria might be planning a false-flag attack involving chemical weapons.

However, before the investigation concluded, the US, the UK and France launched a massive missile strike against Syria, which they claimed targeted government facilities used to manufacture chemical weapons.

In 2013, Syria was also accused of launching chemical attacks, which reportedly also took place in the Damascus suburbs. Afterwards, the government relinquished its sizable arsenal of chemical weapons, which was subsequently destroyed under OPCW control.