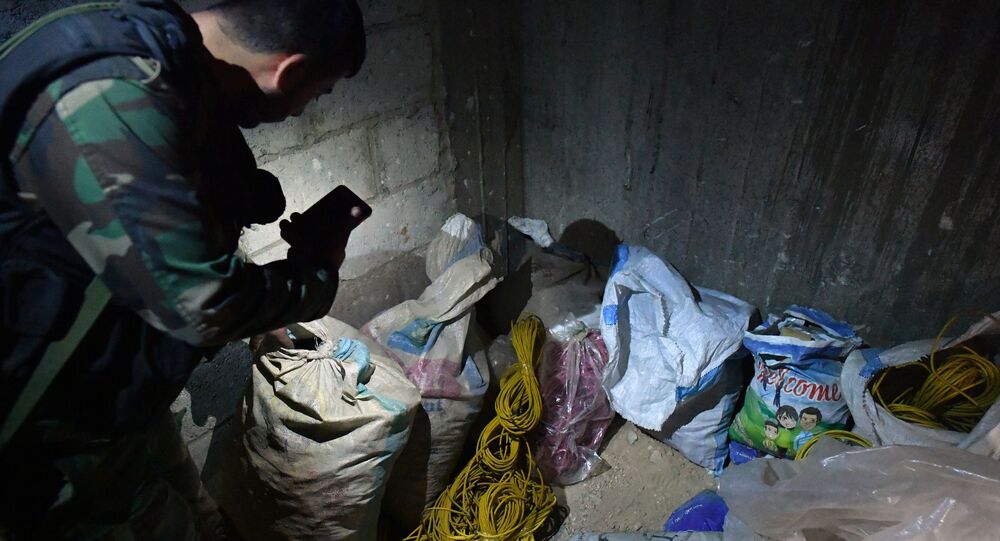 Russian servicemen have found another evidence of manufacturing of military poisonous substances by Jaish al-Islam terrorists in the Syrian town of Douma, where on April 7 a false-flag attack took place, serving as a pretext for the US and allies to blame the government and strike the country.

"During the examination of the chemical laboratory a lot of hexamin was discovered, which is yet more proof that militants had been producing chemical weapons," a specialist of Russia's radiological, chemical and biological defense corps, Alexander Rodionov, told journalists on April 20.

He explained that the substance is used for making explosives, as well as sarin-type nerve agents.

On April 17, Russian servicemen found a laboratory in Douma which could have been used by terrorists to manufacture chemical weapons. A former member of the UN’s biological commission told Sputnik that it was "highly likely" that the lab's equipment was made in Germany or the UK.

© Sputnik / Mikhail Voskresenskiy
Chemical Laboratory Warehouse of Militants Discovered in Douma
10
The Russian Defense Ministry has reported that militants left Douma on April 13 — over 21,00 of them and their family members moved out of the town via humanitarian corridors. The following day OPCW experts were scheduled to enter Douma to investigate an an incident that occurred on April 7 — which Western countries consider a government-conducted chemical attack based on social media "evidence" and the notorious White Helmets' "accounts" — but on that day the United States, Britain and France launched a powerful missile attack on Syria.

A month before the Douma false flag attack and the ensuing strike, the Russian General Staff had warned about such a development.