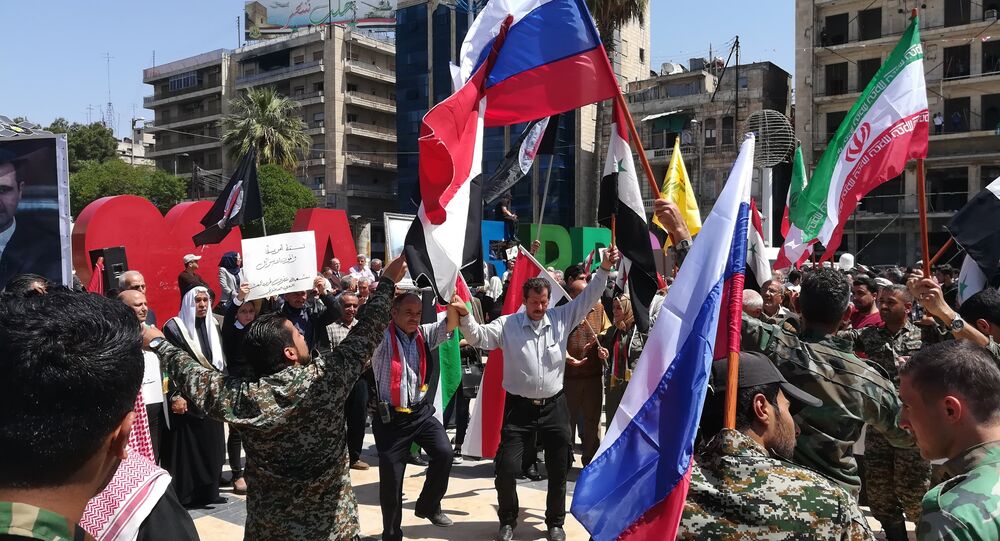 WASHINGTON (Sputnik) - The Syrian nation was not scared by the recent attack conducted by the United States, France and the United Kingdom, but celebrate the capabilities of the country's army, which managed to shot down some of the missiles, and thank Russia for the support, a resident of the Syrian city of Homs told Sputnik.

Early on Saturday, US President Donald Trump announced the military action in Syria in response to the alleged chemical weapons attack in the city of Duma in the Damascus suburb of Eastern Ghouta. As a result, Washington and its allies fired missiles on the Syrian facilities, which they claimed were linked to the chemical weapons production.

Western states fired over 100 missiles on the Syrian targets, however part of them had been intercepted by the Syrian air defense. No people were killed, but at least three sustained injuries as a result of the strikes.

Mays Issa, a 36-year-old specialist working with persons with disabilities in Homs, told Sputnik that she did not find out about the strikes until she woke up in the morning on Saturday, several hours after the attack.

"People slept in Syria… It may be ironically to say that I personally did not know of the strike as well as all the residents of the Homs city until the morning, when I read the news at 10:00 a. m. [07:00 GMT]… There was no evacuation of residential or institutional buildings," Issa said.

© AP Photo / Hassan Ammar
Arab League Summit Condemns Alleged Use of Chemical Weapons by Damascus
According to the resident, later in the day she heard that the strike had targeted the scientific research center near Homs, however it was diverted from the facility and the projectile injured three people.

"People in the southern areas of Damascus woke up to scary sounds, as well as in the countryside of the city of Homs, where they went down to the ground floors of the buildings and they opened the doors and windows because of the impact of the strike," she added.

Soon after the attack on Syria, Issa spoke with her friends in Damascus, who described her what they heard and saw during the night.

"Many friends in Damascus, especially in the southern areas of the capital, said they saw with naked eye that US missiles were burning in the sky and falling before reaching Damascus. The view was horrifying, as they called it," the Syrian resident said, adding that they proud that most of the rockets were intercepted by the Syrian forces.

According to Issa, her friends told her that in the Syrian capital the strikes had targeted a scientific research center in the Alkaswa area.

Just after the attack the Syrians left their houses in both Damascus and Homs to celebrate the fact that the Syrian army succeeded to hit the majority of missiles.

"Immediately after the strikes, residents of Homs and Damascus went to the streets in huge marches to raise the Syrian flag and cheer the Syrian army and thank Russia for its support for Syria and its independence," Issa said.

She added that the Syrians wanted to say to the world that Damascus would not succumb to the Western pressure and would continue its struggle against terrorism until a complete victory.