MOSCOW (Sputnik) - The strike by France, the UK and the US on Syria is unlikely to have any negative effect on the unity of the Middle Eastern nation, on the contrary, it may enhance the position of Syrian President Bashar Assad, Abdulbari Zebari, the chairman of the Iraqi parliament's Foreign Affairs Committee, told Sputnik.

Early on Saturday, the United States held a joint strike with France and the United Kingdom on Syrian targets which the Western allies deem related with Damascus' alleged chemical weapons program.

"As it was a very a limited military attack, I do not think it will have great effect if any regarding the unity of Syria. I believe it might strengthen the role of Syrian President Bashar Al Assad," Zebari said. 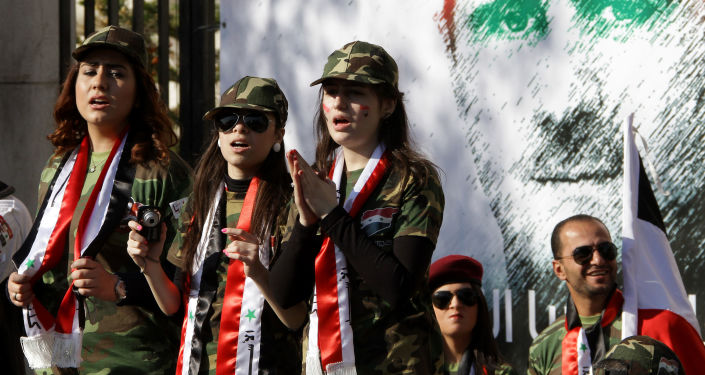 © AFP 2019 / Louai Beshara
Damascus Residents Gather in Center to Support Army, Assad After Attack (PHOTOS, VIDEO)
The Western allies' strike on Syria followed the reported chemical weapons attack in the Syrian city of Duma in the Damascus neighborhood of Eastern Ghouta. The United States, and the European Union, put the blame of the attack on the forces of Syrian President Bashar Assad.

Assad condemned the western states' attack, saying that this aggression would only unite the Syrian people in their fight against terrorism.

Damascus, which has repeatedly said it had eliminated its chemical weapons under the supervision of the Organisation for the Prohibition of Chemical Weapons (OPCW), denied any involvement in the incident in Duma. In addition, Syrian media reported, citing the Foreign Ministry sources, that Damascus invited the OPCW to come to Syria and conduct a probe into the reported attack.

A Syrian source told Sputnik earlier on Saturday, that the work of the OPCW experts would start on Sunday.