“We welcome that our US, UK and French allies, as permanent members of the UN Security Council, have assumed responsibility in such a form. The military strike was necessary and proportionate to support the effectiveness of the international boycott of the use of chemical weapons and to prevent the Syrian regime from committing further violations,” Merkel’s statement, released on the German government spokesman’s Twitter page, read.

Merkel added that Germany would decisively support all diplomatic efforts in order to “counter the erosion of the Chemical Weapons Convention.”

Earlier in the day, German Foreign Minister Heiko Maas stressed that Berlin is not going to participate in US-led strikes on Syria and that has been agreed with allies.

"This is not the role we want to play in this conflict as agreed with our partners," Maas said in the interview with the Spiegel magazine.

"Unfortunately, there may be some cases, when military means have to be used as means of last resort… [we] should put an end to the use of chemical weapons, it cannot proceed without consequences," the minister added.

Maas went on demanding that the Organisation for the Prohibition of Chemical Weapons (OPCW) carry out another independent investigation of suspected cases of chemical weapons use in Syria. 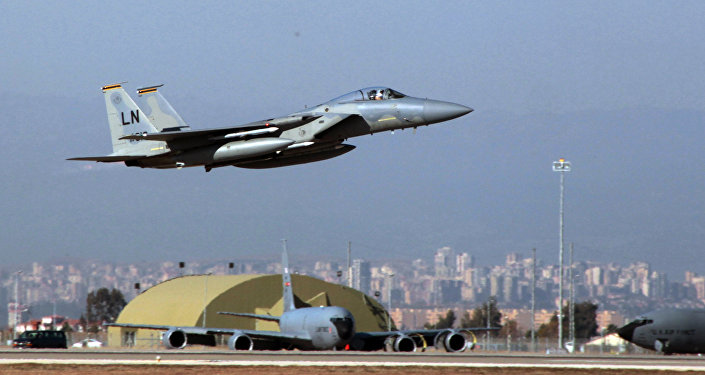 © AP Photo /
Erdogan on West's Strike: Assad Got Message "Massacres Wouldn't be Left Unanswered"
Early on Saturday, the US, Britain, and France fired over 100 missiles at Syria in a punitive strike over the alleged chemical incident in Douma. The European Union and the United States immediately blamed the forces of Syrian President Bashar Assad for the incident, however, Merkel announced that Berlin would not participate in possible military action against Syria but supported sending a message that the use of chemical weapons was unacceptable.

Reports about the alleged attack in the town of Douma, located in the Damascus suburb of Eastern Ghouta, emerged on April 7, in Syrian opposition media. Damascus refuted the claims that chemical attack took place in the city of Douma in Eastern Ghouta and denied the statements that Damascus was behind it, recalling that all chemical stockpiles of the country had been destroyed under the OPCW control. Moscow has called for a thorough investigation into the alleged attack to be conducted before any conclusions are drawn.