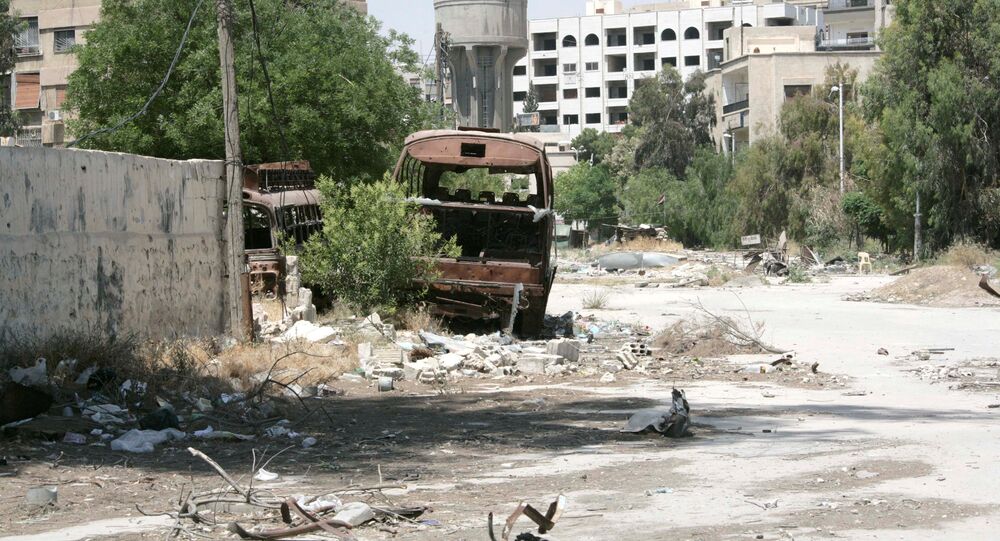 MOSCOW (Sputnik) - The US-led airstrikes against Syria earlier in the day are most likely the last show of force before an inevitable withdrawal, a spokesman for the Moscow platform of the Syrian opposition Mohannad Dlykan told Sputnik.

"Despite the arrogance shown by Western aggression against Syria, the coming days and weeks will prove that this aggression is a sign of the complete withdrawal of the USA from Syria, militarily and politically," Dlykan said.

The spokesman added that the US administration needed this show of force to cover up its intention to leave Syria.

The United States, joined by the United Kingdom and France, launched about 110 missiles at targets in Damascus and beyond earlier on Saturday, according to the Syrian General Staff.

© AP Photo / Virginia Mayo
UK Prime Minister May Calls Missile Strike Against Syria 'Right, Legal'
The representative of Cairo platform of the Syrian opposition, Firas Khalidi, told Sputnik that the US-led strikes on Syria, which are not going to bring about positive changes in the negotiation process, are harmful for political settlement in the Arab country.

"Any action that does not serve or make real progress in the political process is harmful," Khalidi said.

The representative pointed out that the strike was rather aimed to send a signal to Tehran and its allies than to inflict real damage to Syria.

"The way in which the strike was carried out is more like an intimidation, and then the strikes had enough space to prevent the collapse of the regime's militias. So I think that this strike has nothing to do with Syria, but only to destroy part of the remaining defenses and to send a strong message to Iran and its allies," the spokesman added.

On Saturday morning, the United States, the United Kingdom and France launched strikes on a number of targets in Syria in response to reports of a chemical attack on Douma, a suburb of Damascus, allegedly carried out by the Syrian government. Damascus has rejected allegations of its use of chemical weapons.