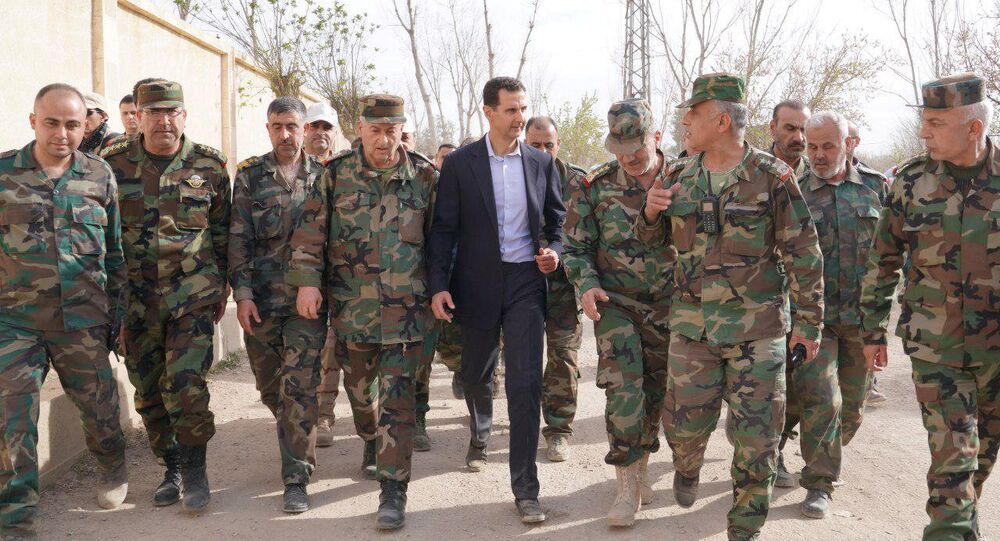 Syrian President Bashar Assad and his family have not left the country, a source familiar with the matter told Sputnik Tuesday.

Several Middle East-based media outlets have reported on the alleged evacuation of the Syrian leader and all of his relatives to Tehran, as fears of military actions by Western states against Syria loom.

A source close to the matter, however, has said "These reports are completely wrong."

Meanwhile, the US military is reportedly developing several options for striking Syria following an alleged recent chemical attack against civilians in the town of Douma.

© REUTERS / Amr Abdallah Dalsh
EASA Issues Alert for Eastern Mediterranean Due to Possible Airstrikes on Syria
The Washington Examiner reported, citing Pentagon sources, that there were several possible plans for a military response to the attack in Syria. One option includes a strike similar to last year's, when the United States launched 59 cruise missiles on a Syrian Air Force airfield in Homs, the report said.

US President Donald Trump could reportedly choose an even stronger option against Assad this time around. Trump reportedly has said that all "options were on the table" and that the alleged gas attack will be "met forcefully."

Moreover, a US State Department spokesperson told Sputnik Monday that Washington and its allies were in close consultations over a possible response to the alleged attack.

"The president and his national security team are consulting closely with allies and partners to determine the appropriate response," the spokesperson said. "As President Trump clearly stated, there will be consequences for this unacceptable atrocity."

© AP Photo / Fabrizio Bensch/Pool
US to Deploy Harry Truman Strike Group to Middle East Amid Syria Tensions
Meanwhile, the European Aviation Safety Agency has alreasy issued an alert notification for the Eastern Mediterranean area due to possible missile strikes on the Syrian coast within the next 72 hours.

Russian Ambassador to the United Nations Vassily Nebenzya warned at a UNSC meeting on Tuesday that the United States would bear responsibility if it launches military operation against Damascus.

"If you took the decision to carry out an illegal military adventure — and I do hope that you will come to your senses — well, then you will have to bear responsibility for it yourselves," Nebenzya said.