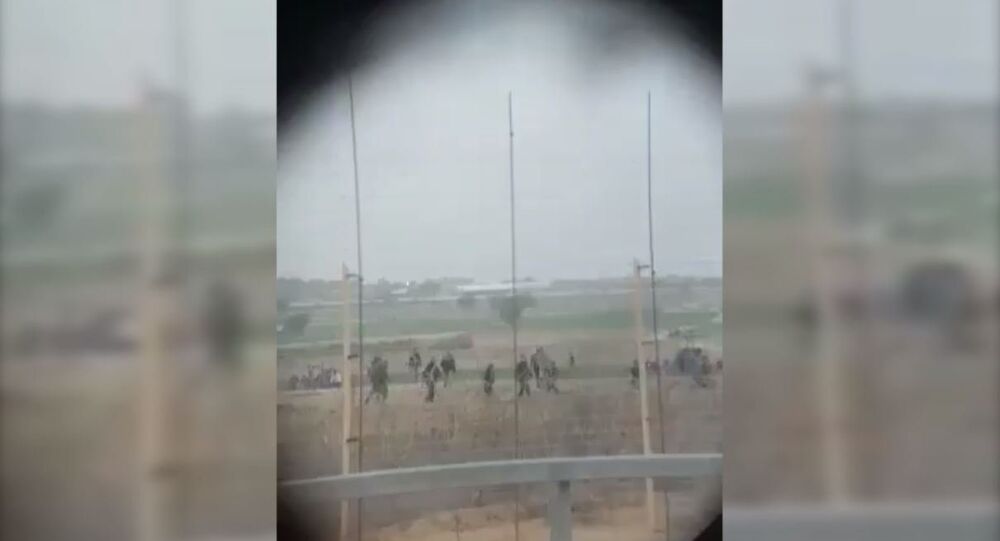 The Israeli Defense Forces (IDF) responded swiftly after a video emerged Monday of its snipers cheering as one of their number shot an unarmed Palestinian protester. The IDF released their findings in their initial investigation into the event just one day after the video was released.

"The video depicts a short part of the response to a violent riot, which included rock hurling and attempts to sabotage the security fence," the IDF said in a statement, adding that the video is from December 22, 2017, and therefore does not document events connected with the Great Return March, a weeks-long mass demonstration demanding Palestinians' right of return that has been ongoing since March 30.

The demonstration the video captures was held in response to US President Donald Trump's decision to recognize Jerusalem as the capital of Israel, though the Palestinian leadership insists East Jerusalem must be the capital of an independent Palestinian state. The man who was shot is "suspected of organizing and leading this incident," the IDF said. Two Palestinian protesters were killed that day; more than 30 have been killed during the Great Return March.

"Do you have a bullet in the barrell?" one IDF soldier can be heard asking in the video, and then, "is it on him?" About 18 seconds later, the firing of a single sniper rifle round can be heard as the man falls.

"Wow, what a video! Yes! Son of a bitch. What a video, here, run, get him out of there. Of course I filmed it," a soldier can be heard saying in Hebrew immediately after the shooting. Another IDF soldier says that the man was "hit in the head," although the IDF contradicted that account in its statement today.

"He was a few meters from the fence. He was hit in the leg and injured," the IDF's said, adding that the soldier who filmed the killing did so from a different position than the shooter.

Currently, IDF soldiers repressing the Great Return March are doing so under orders to shoot to kill, according to The Jerusalem Post.

Israeli politicians from across its political spectrum have commented on the viral video. Yair Lapid, the journalist-turned politician who founded the the liberal-Zionist Yesh Atid party, tweeted that he has "full faith in the chief of staff and the IDF command that they will investigate the sniper video without hesitation and in line with the rules and values of the IDF. Israel's moral standing is part of its national security and gives it the qualitative edge over our enemies."

Jamal Zahalka, chairman of Joint List, a coalition of four Arab-majority political parties in Israel, called it a "killing spree commanded by [Prime Minister Benjamin] Netanyahu," according to multiple reports, adding, "No wonder the soldiers behave this way when ministers, lawmakers, the media and public opinion are party to the jubilation at the mass killing of Palestinians in Gaza."

Israeli Defense Minister Avigdor Lieberman told journalists on Tuesday, "The Gaza sniper deserves a decoration, and the photographer a demerit."

Oren Hazan, an influential member of the Knesset with the ruling Likud party, who has been suspended from his position until June over sexual harassment and stalking, tweeted, "What's all the fuss about? it was noted in advance: anyone who approaches the fence, armed or not, is gonna get it. As it should be!"