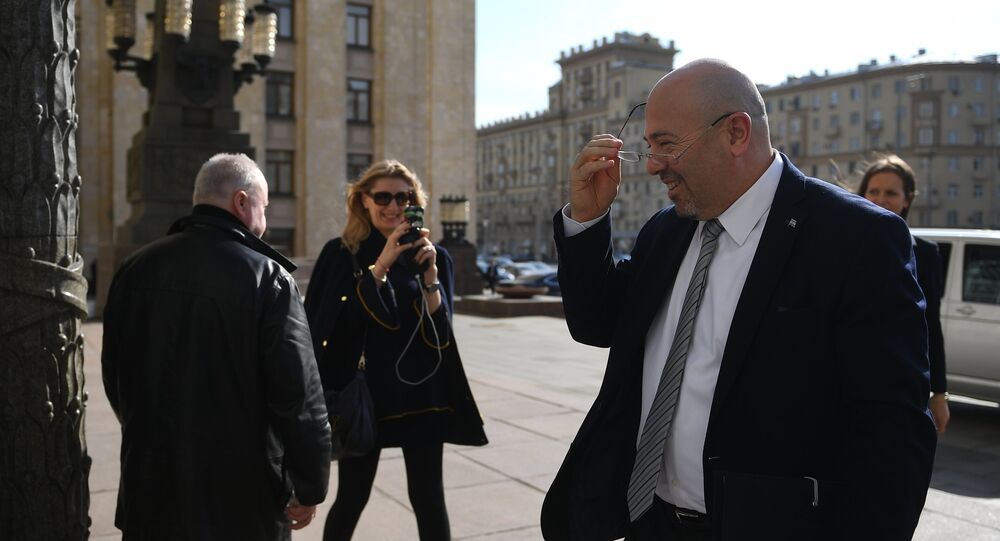 Israel’s envoy to Russia Gary Koren is set to meet with Russian Deputy Foreign Minister Mikhail Bogdanov, according to the Sputnik correspondent.

Israel’s envoy to Russia has been summoned by the Russian Foreign Ministry regarding an airstrike on April, 9 on a base in Syria attributed to Israel, where two Israeli F-15 fighter jets had carried out a strike against Syria's T-4 airbase amid reports by Syrian media that the military facility had been targeted by missiles.

Israel’s envoy to Russia Gary Koren has explained that the meeting with Deputy Foreign Minister Bogdanov was just a regular conversation.

"Ongoing discussions are being constantly held with the Russians and therefore the ambassador will today meet with Deputy Minister Bogdanov," the Foreign Ministry said.

The aim of the reported airstrike was the Tiyas air base located outside of Palmyra in central Syria. Israel has previously carried out at least one acknowledged attack on the base, which is known to be home to an Iranian drone program.

Israel and Russia have organized their military efforts in Syria in recent years in order to avoid disputes and accidental conflicts.

© AP Photo / Syrian government TV
Iran Vows to Respond to 'Israeli Crime' Referring to Airbase Targeting - Reports
Spokesman for Russian President Vladimir Putin Dmitry Peskov said that Israel had not spoken to Moscow ahead of the airstrike even though Russian military advisers could have been present at the base, which he described as "a cause for concern for us."

Israel has declined to comment on the attack, for which it has been accused by Russia, Syria and Iran.

On April 9, the Russian Defense Ministry stated that two Israeli aircrafts had attacked the airfield, with strikes being carried out from Lebanese airspace. According to the ministry, five out of eight missiles fired had been intercepted by Syrian air defenses before reaching their targets.