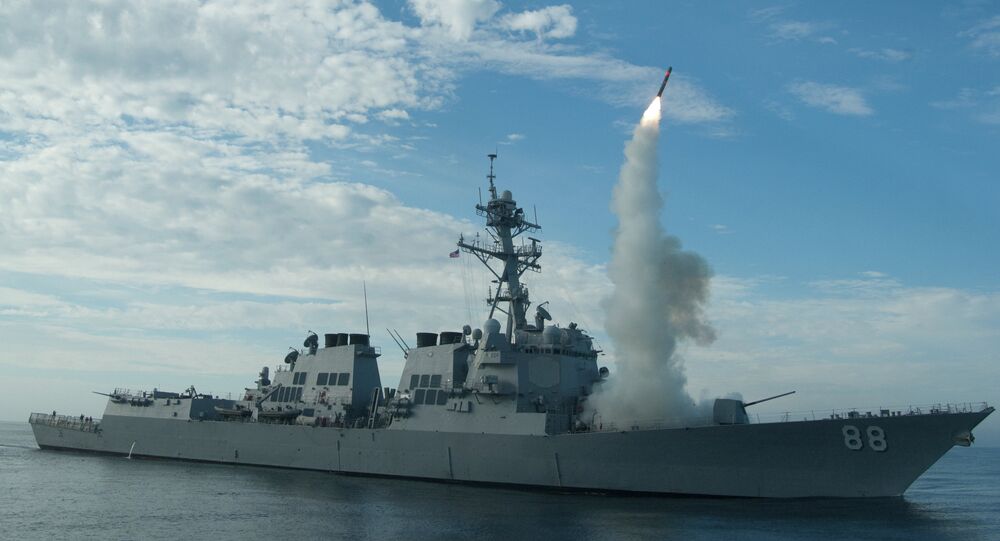 Lavrov on Likely US Strike on Syria: Moscow Has Commitments Towards Damascus

Russian Foreign Minister Sergei Lavrov has commented on the unfolding situation in Douma, the Syrian town amid the alleged chemical attack accusations by Western states.

Russia Has Obligations to Syria

"As for the warnings from the US President's officials that Washington does not exclude the possibility of striking Syria — you know, our military has already reacted to this. We have our obligations to Syria. Obligations based on our agreement concluded with the legitimate, legal government of the Syrian Arab Republic at the request of this government, which is, incidentally, a UN member-state," Lavrov said at a briefing in Moscow.

© REUTERS / Omar Sanadiki
Douma Medics Received No Patients With Signs of Chemical Poisoning - Russian MoD
On Sunday, US President Donald Trump accused Russia and Iran of backing Syrian President Bashar Assad. Trump's Homeland Security Advisor Tom Bossert said that he did not rule out military actions against the Syrian government in connection with the reports.

Russia stands for an honest investigation into the alleged chemical attack in Syria, but is against the appointment of perpetrators without any evidence, according to Russian Foreign Minister Sergei Lavrov.

"But when this investigation is based on the need to come to a given point, and the given point here is 'Assad did it with the support of Putin', there is no serious conversation here," he said.

Lavrov noted that Russian specialists had not found any traces of a chemical attack on the Syrian rebel-held town of Douma, after allegations from the international community.

"Our military specialists have visited this place… and they did not find any trace of chlorine or any other chemical substance used against civilians," he said.

Sergei Lavrov stated that the reaction of the West to the reports of the alleged chemical attack in Syria has been reduced to "simple slogans."

"Of course, the regime did this, and since Russia supports it, Russia and Iran are still to blame, and, of course, it needs to be investigated," he said, referring to the Western states' reaction on the alleged chemical attack in Syria.

"I am sure that many people saw these photos where children, adults, are showered abundantly from buckets, and this is done by people who are not using protective masks in order to protect themselves from the possible impact of the substance from which those whom they are helping suffered," the Russian Foreign Minister said in reference to the photos of the alleged 2017 chemical attack in Syria's Idlib.

According to Lavrov, this all was very reminiscent of the one-year-old photos, when the so-called "White Helmets," which have proved their fraudulent nature, without any special means of protection, worked with a funnel, which, according to the same white helmets, was formed as a result of a sarin gas bomb drop.

"But, as you see, this all became the reason for the unfolding of the colossal anti-Syrian campaign, which is now being deployed against us under the pretext that Russia covers for the criminal regime, as they say," Lavrov told journalists at the briefing.

© AP Photo / Bernadett Szabo
Johnson Calls for Urgent Probe Into Reports on Alleged Chemical Attack in Syria
The Russian Reconciliation Center for Syria has repeatedly denied reports of a chlorine bomb allegedly being dropped on Douma by government warplanes and is ready to send its specialists in radiation, chemical and biological defense to the area to collect data that will confirm these claims are fabricated.

In Moscow, the Russian Foreign Ministry has rejected the allegations about the alleged use of chemical weapons by Damascus as an attempt to help the terrorists and justify possible military intervention in Syria from abroad.

On March 13, Russia's military chief of staff, General Valery Gerasimov, stated that Moscow had intelligence about militants in Eastern Ghouta preparing a mock-up chemical attack in the area.