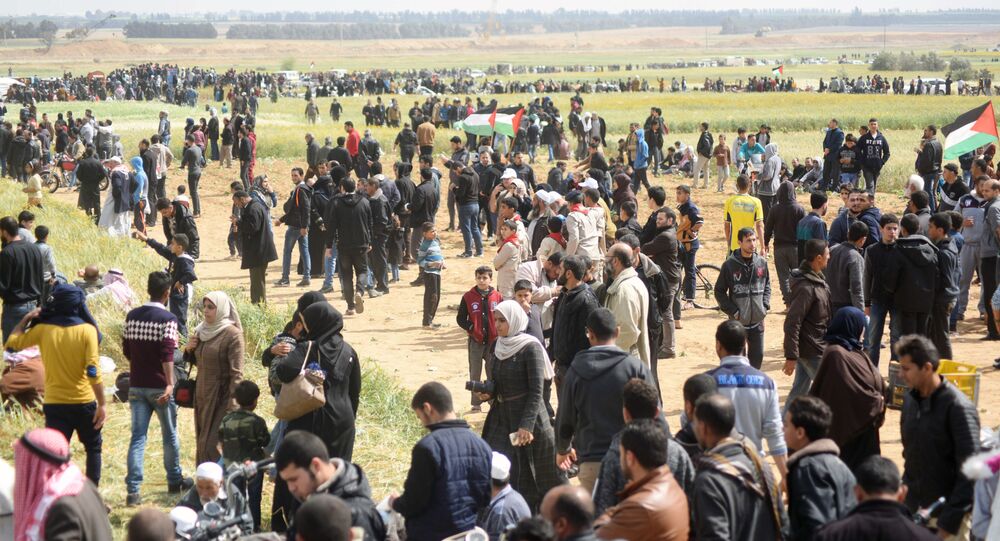 GAZA (Sputnik) - Ten Palestinians, including a reporter, were killed Friday when protesters clashed with Israeli troops guarding the border with the Gaza exclave, a Palestinian health ministry spokesman told Sputnik.

"Ten people died yesterday, one of them succumbed to a wound he sustained on Friday," Ashraf al-Qudra said, adding the Palestinian journalist died of a gunshot wound at a hospital.

Thousands of demonstrators gathered Friday at five camps along the border fence and tried to cross into Israel, using smoke from burning tires for cover from Israeli snipers,  reportedly injuring over a thousand Palestinian protesters.

Israeli troops used tear gas and live fire against the protesters who demanded passage to their native land. A spokesman for the Israel Defense Forces credited robust response to a significantly lower number of deaths after around 20 people died at last week’s rally.

Palestinians who want to return to their lands in Israel renewed their attempts this week to scale the fence on the edge of Hamas-controlled Gaza. They were met with tear gas and live fire by Israeli forces.

An estimated 20,000 demonstrators rallied at the border this week, down from around 40,000 last week when 19 people were killed.