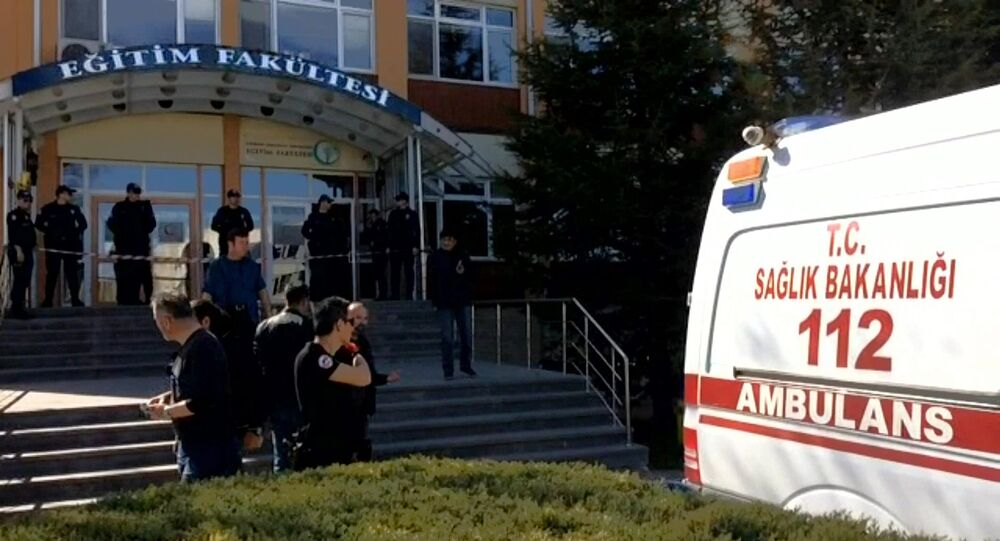 At least four people were killed and three injured as a result of the shooting that took place at Osmangazi University in the Turkish city of Eskisehir, the Anadolu news agency reported. The attacker, reportedly a university researcher, is being detained by the law enforcement services.

The agency reported that the attack has been carried out by an unknown gunman, who is currently being detained. The four people killed as a result of the assault were university employees: the assistant dean, a faculty secretary, a lecturer and a staff member from the education faculty of the university, the media specified.

The shooter himself is reportedly a researcher at the university. The motives behind the attack remain unexplained.

The Turkish newspaper Yeni Safak quoted Hasan Gonen, the rector of the university, who described the incident: "A researcher named Volkan entered the dean's office, the Dean himself was not in the office at that moment. There was Fatih Bey (a secretary), Volkan fired at him, and then fired at the assistant dean and 2 other teachers, who were on the top floor. After that he left the building with a gun in his hand, followed by the security guards of the university. Then the police arrived and he was detained. Four people were killed as a result of the attack."

According to live footage from the scene, medical services have arrived at the scene.

Possible Reasons Behind the Shooting

One of the employees of the Turkish Eskisehir University and witness to the incident in his comment to Sputnik named a case allegedly filed against the shooter as a reason behind the attack. According to the university staff member, the attacker was charged with the FETO membership (FETO - the organization of the preacher Fethullah Gulen).

"An hour ago, one of the researchers of our pedagogical department learned that a case filed again him [the attacker] concerning FETO. He with a gun in his hands went into the dean's office and fired at him and his assistant from a short distance, both died on the spot. After that, he went out into the corridor and there he killed two more employees of the university. Then he shot several times in the air, after which he was seized by the security officers of the university," the employee said.

He added that the shooter recently was in an unbalanced condition and was "wring reports about everyone".