'Do Not Preach to Us': Netanyahu Steps Up War of Words With Erdogan

Netanyahu took to Twitter to continue the war of words with Erdogan, reminding him of what he said were Turkey’s crimes:

“Erdogan is not used to being answered back to. He should get used to it. Someone who occupies northern Cyprus, invades the Kurdish regions, and slaughters civilians in Afrin should not preach to us about values and ethics,” Netanyahu tweeted in Hebrew.

Turkey invaded northern Cyprus in 1974 as a response to an attempted coup in Cyprus backed by the Greek military, and later occupied 37 percent of the country’s territory. In 1983, the Turkish Republic of Northern Cyprus, created on the occupied areas, declared its independence, which was recognized only by Turkey.

On January 20 of this year, Turkey launched Operation Olive Branch against Kurdish forces in Syria’s Afrin as a response to the US’ decision to start training a 30,000-strong border security force, mainly composed of the Kurdish Syrian Democratic Forces, which Ankara considers to have links with People’s Protection Units (YPG) and Kurdistan Workers’ Party (PKK), viewed by Turkey as terrorist organizations.

Netanyahu’s comments came shortly after Erdogan had branded him a “terrorist” and an “occupier.”

“Hey Netanyahu! You are an occupier. And it is as an occupier that you are on those lands. At the same time, you are a terrorist. What you do to the oppressed Palestinians will be part of history and we will never forget it. The Israeli people are uncomfortable with what you’re doing. We are not guilty of any act of occupation,” Turkey’s President said in a televised speech.

Prior to that, Netanyahu fired back at Erdogan, who described Israeli actions against Palestinian protesters as an “inhumane attack.”

"The most moral army in the world will not be lectured to on morality from someone who for years has been bombing civilians indiscriminately," Netanyahu tweeted, adding "apparently this is how they mark April 1 in Ankara." 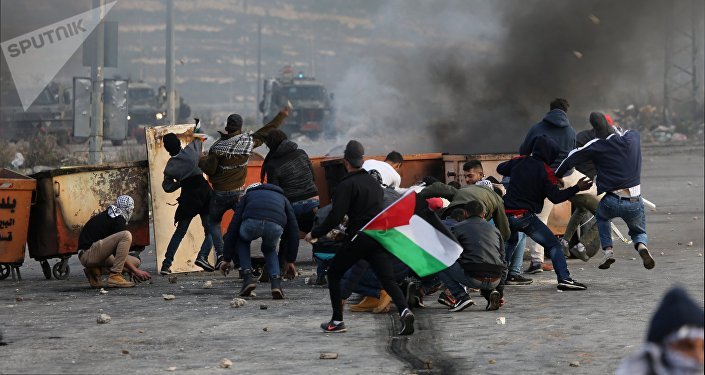 © Sputnik / Issam Al-Rimawi
Israel & US Devising 'Dangerous Plot' in Middle East – Iranian Parliamentarian
While Turkey has strongly condemned the disproportionate use of force by Israeli troops against “peaceful protesters” in the Gaza Strip, Netanyahu has praised soldiers for “protecting” Israel’s “sovereignty and the security of its citizens.”

The two have exchanged barbs since the very first day of “The Great Return March,” organized by Palestinians on the Israeli-Gaza border to press for the refugees’ right to return to their homeland. The six-week-long protest, which kicked off on March 30, has already claimed the lives of at least 17 Palestinians; the Israel security forces responded with tear gas, live fire and rubber-coated pellets to quell the crowds, injuring over 1,500 people.