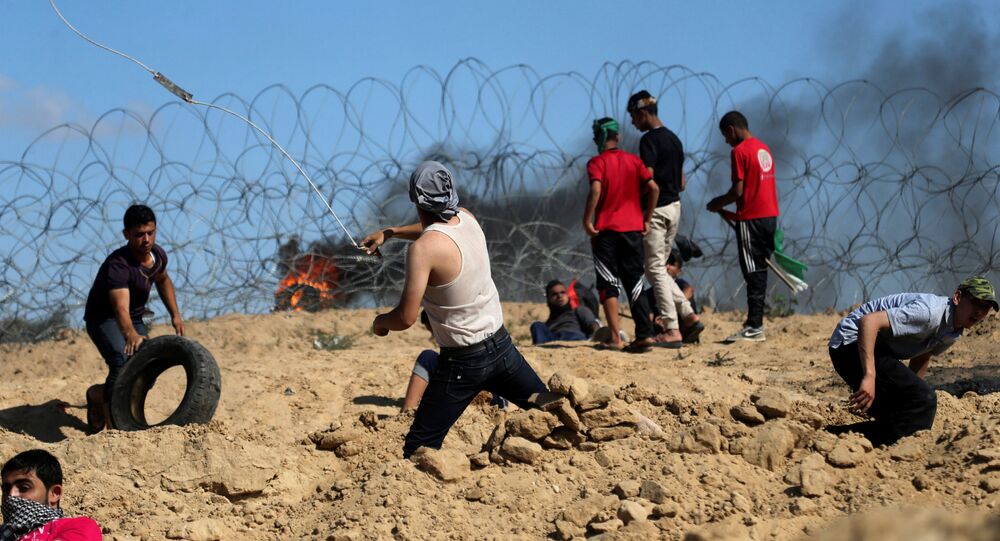 A young man, taking part in the “Great Return March,” died while running away from the Israeli border fence as a result of an indiscriminate shooting, Palestinian activists reported, having shared disturbing video.

The graphic video, shared on social media by other Palestinian protesters, shows a man, carrying a rubber tire and running from the security fence, collapsing after being shot in his back. According to Palestinian media, Abed el-Fatah Abed e-Nabi, the slain man, was only 19 years old.

Disgusting and awful..
Moments of killing a Palestinian young man in cold blood by an Israeli Zionists snipers at #Gaza strip borders during the peaceful protests of #GreatReturnMarch, i was there we were protesting peacefully and Israeli were shooting directly toward us!! pic.twitter.com/h5ydVRRqhf

Another video from different position, showing the Israeli crime against a young man 19 years old, no reasons justify this horrible crime, they shoot him in his head directly without any type of mercy!!
Israel is a terrorism state. #GreatReturnMarch Free Palestine 🇵🇸 pic.twitter.com/bjk03cfiK2

Last picture for the Palestinian young “ Abd AlFatah” before the Israeli Zionists bastards snipers shoot him in the his head directly and killed him in cold blood 💔💔 Rest In Peace bro ❤️🙌🏻🇵🇸 Free Palestine #GreatReturnMarch pic.twitter.com/5O1Xcw1NbM

In the meantime, the IDF has questioned the authenticity of the clips being shared by Palestinian protesters.

“The Hamas terrorist organization has published several videos, some of which only depict parts of incidents while others are edited or completely fabricated. […] The IDF will continue operating in order to ensure Israeli sovereignty is not breached and to protect Israeli civilians. The participants of the violent riots are situating themselves in a dangerous area, thus putting themselves in harm’s way,” the army stated.

The protesters are insisting on the return of Palestinian refugees to the territories they claim were illegally seized by Israel, while Israeli authorities demand that Palestinians settle only in Gaza and the West Bank.

“The Great Return March,” dedicated to the so-called Land Day, an annual commemoration of the deaths of six Arab citizens killed by Israeli forces during demonstrations over government land seizures in 1976. At the same time, the protest addressed the Nakba (disaster in Arabic), when hundreds of thousands of Palestinians were forced to flee after Israel announced its independence in 1948.