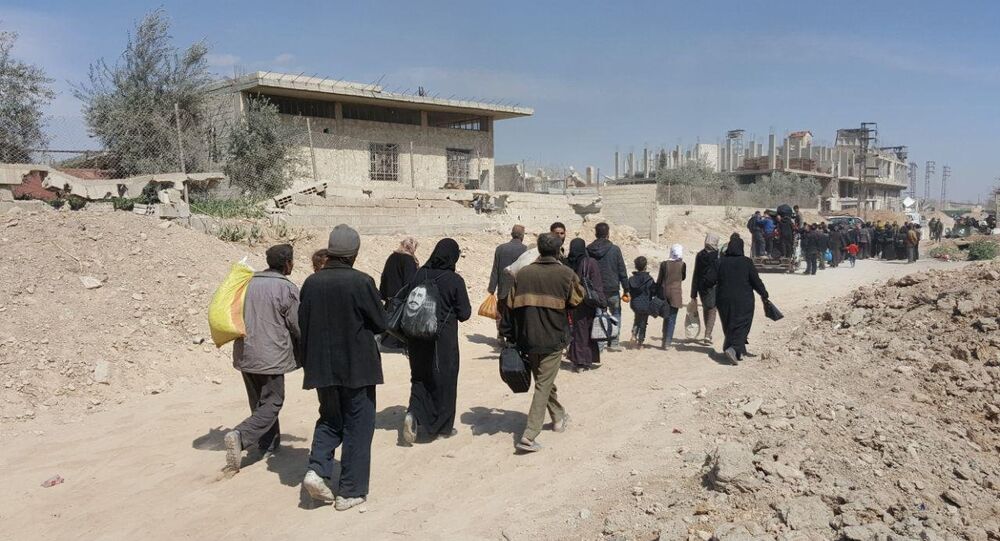 Over 6,000 Militants With Families Evacuated From E Ghouta - Russian MoD

MOSCOW (Sputnik) - More than 6,200 militants and their families left Syria’s Eastern Ghouta via a humanitarian corridor on Friday and were transported to the Idlib province by buses, the Russian Defense Ministry said Saturday.

“Via a humanitarian corridor, 6,276 militants and members of their families were transported by 141 buses to the province of Idlib on March 30,” the statement read.

The ministry noted that Failaq al-Rahman militants continued to leave the settlement of Irbin in Eastern Ghouta as a result of the agreements reached by senior officials of the Russian center for Syrian reconciliation with the group’s leaders.

© REUTERS / Bassam Khabieh
Syrian Army Discovers Explosives Production Plant in Eastern Ghouta - Reports
The total number of militants and their families, who have left Irbin since the relevant agreement has been in place, has reached 38,191.

The ministry also announced the decision to prolong the regime of humanitarian pauses to let the rest of the Failaq al-Rahman militants leave Eastern Ghouta.

The ministry further noted that over 150,000 people had left Eastern Ghouta since the launch of daily humanitarian pauses in late February organized by the Russian center for Syrian reconciliation.

"Overall since the launch of the humanitarian pauses in Eastern Ghouta the evacuation of over 150,000 people has been organized with the help of Russian center [for Syrian reconciliation]," the statement read.

The ministry added that the civilians continued to return to the settlements liberated from militants with Russian military delivering humanitarian and medical aid.

According to the statement, the reconciliation center has contributed to freeing eight people kept hostage in Eastern Ghouta.

Meanwhile, a source in Syrian security forces told Sputnik that the last group of militants is set to leave the southern areas of Eastern Ghouta and move to the province of Idlib.

"The last of group of militants is leaving settlements of Jobar, Zamalka, Irbin and Ein Tarma, located in Eastern Ghouta, for Idlib. After the evacuation the area will be fully liberated from militants," the source said.

The area's liberation is very important for the Syrian government as terrorists hiding in those settlements have been shelling and launching rockets targeting Damascus on a daily basis.

The situation in Eastern Ghouta has been tense over the past months, resulting in ongoing shelling by militants of Damascus and fire from the Syrian pro-government forces.