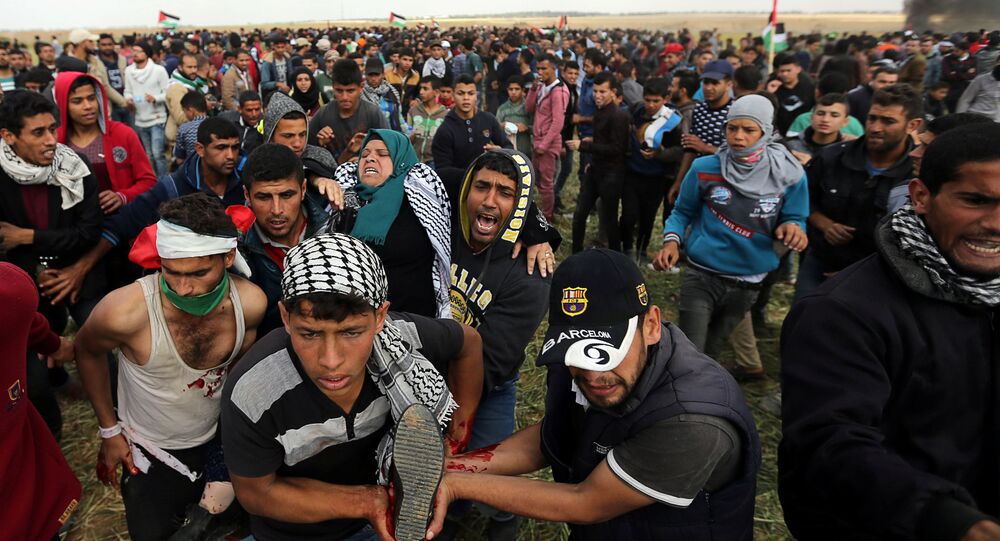 GAZA STRIP/TEL AVIV (Sputnik) - Dozens of thousands of Palestinians gathered near the border between Israel and the Gaza Strip to participate in demonstrations in support of Palestinian refugees, while a number of clashes have erupted between Israeli servicemen and protesters.

The event dubbed "The Great Return March," which started earlier in the day, is dedicated to the so-called Land Day commemorating the day in 1976, when Israeli troops killed six Arabs protesting against confiscation of land. On May 15, the Palestinians will commemorate Nakba (disaster in Arabic), when hundreds of thousands of Palestinians were displaced after Israel announced its independence in 1948.

© REUTERS / Mohammed Salem
Envoy to UN: Moscow Ready to Offer Platform for Israeli-Palestinian Talks
The protest sets an objective to attract attention to the problem of people, who have become refugees because of Nakba, as well as of their descendants. The event has been organized by such groups as the Hamas movement, the Fatah party, the Popular Front for the Liberation of Palestine and the Democratic Front for the Liberation of Palestine among others.

The organizers, who have announced that the protest would be peaceful, failed to cope with all the people, who gathered at the demonstration, and several groups of Palestinians approached the border and clashed with Israeli servicemen.

At the end of the day, local doctors reported about at least 14 killed and over 1,200 injured Palestinians.

Israeli servicemen have not been killed or injured in the clashes. The Israeli side claims that it had to use force and laid responsibility for the victims on Hamas.

© REUTERS / Ibraheem Abu Mustafa
Israel's Suppression of Land Day Protesters ‘Should be Rightly Understood as a Massacre'
Ronen Manelis, the spokesman of the Israeli Defense Forces (IDF), said that all the killed people were adults under 30 and two of them had been identified as members of a battle group within Hamas.

The Israeli servicemen accuse the Palestinians of use of women and children during the protests.

The IDF used tanks and aircraft to repel the attempt of an armed attack against their positions. The Israeli side does not consider that the situation near the border with the Gaza Strip has normalized.

According to the Palestinian WAFA news agency, Palestinian President Mahmoud Abbas ordered to make Saturday the day of mourning to pay respect to the people killed in the Friday clashes.

"Today’s events on Gaza’s border are huge achievement for Hamas. Succeeded in mobilizing the masses, it’s officials were present and led the way and strategy. while in the WB there’s no way nor strategy and of course no leadership," Issacharoff said on his Twitter account.

Hamas, which is listed as a terrorist organization in a number of countries, including in the United States and Israel, gained control of the Gaza Strip after a short war with Fatah in 2007.

Fatah has repeatedly criticized Hamas for dividing the country and preventing the Palestinian Unity Government from ruling the Gaza Strip. Both groups have been engaged in talks for quite a long time in order to overcome the differences and to restore the Palestinian unity.